New Breast Cancer Treatment Could Be A Game Changer 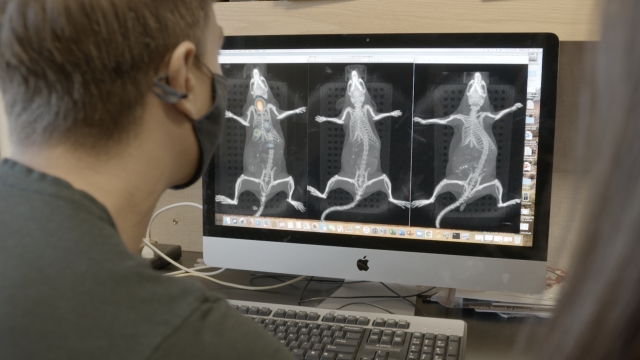 At the University of Illinois, biochemists study "ErSO " — a compound that could be a game changer for the thousands of patients and their loved ones devastated by breast cancer every year.

Lindsey Theis: "Is it fair to call it a breast cancer breakthrough?"

ErSO researcher Darjan Duraki: "I think right now has the potential to be a breakthrough."

"You can watch that go from this large tumor. And then you can't find anything after that," Duraki said. "That gives us a lot of confidence that ErSO has had a really powerful effect in those tumors."

Boudreau began his part of the ErSO work back in 2017, tweaking different properties of molecules to try to make a compound that could have the best anti-cancer effect.

ErSO could have implications for patients outside of these labs. Right now, the five-year survival rate for people with metastatic breast cancer is just 27%.

But by nature, Shapiro said, "bone metastases at the top and at the bottom of the spine, another lung metastasis, as well as a liver metastases."

Scientists were skeptical at first.

"We checked everything to make sure it was fine. And lo and behold, we honestly did get a 99% decline," Duraki said.

Lindsey Theis: "It's all gone."

Duraki knows what this could mean. His mother was diagnosed with breast cancer in 2014.

"That was probably the hardest time period, mentally, to be able to deal with that," he said. "What that kind of did was, it sparked this want to help."

His mom is much better today, in remission and serving as inspiration — not just for Darjan, but for his sister Adriana, who is now an undergrad researcher also studying the future of ErSO.

"I think we work well together," Duraki said.

They, along with the other dozen ErSO researchers are eager but cautious on how it will do in people.

"We've had many molecules that we've taken into humans, not me, but others. And it just doesn't work out," Boudreau said.

"Of course, as a scientist, you'd have to wait to see how it works in humans," Duraki said. "And we're hoping that phase one clinical trials will start soon. However, everything that we have so far is suggestive that it should be a favorable result."

Meantime, the scientists gauge ErSO's effects on other cancer cells — like ovarian, endometrial cancer, and various types of breast cancers — and hope they eventually will be confident in using the word "breakthrough."