The New 'American Horror Story' Could Be All About Charles Manson 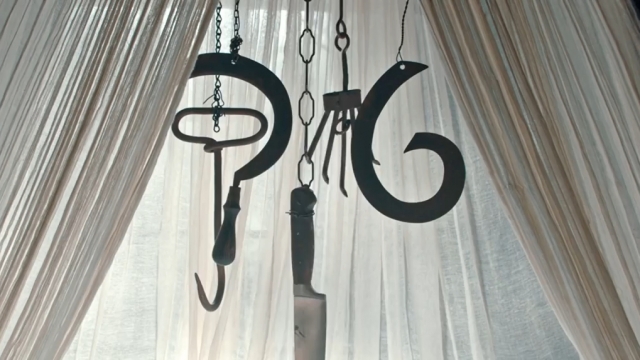 Could the next season of "American Horror Story" be centered around ... Charles Manson?

"Every one of you out there has tried to kill me for the last 25 years, and I'm still here. Ha, ha, ha," Charles Manson said in the ABC documentary "Charles Manson: Journey Into Evil."

A lot of fans think so.

And some clues from new promos seem to back up that theory.

Like this scene from the "AHS" trailer titled "Lullaby."

As multiple fans pointed out on social media, that's because it looks an awful lot like the message Manson girl Susan Atkins left in Sharon Tate's blood on the front door of the house where her body was found.

And yes, this new promotional poster could be just plain creepy.

But when you consider Manson's obsession with making spider-themed artwork, it could have a deeper meaning.

And check out this photo that season-six star Evan Peters posted to Instagram earlier this year.

Is it just us, or does he strongly resemble Manson there? Minus the swastika tattoo, of course.

But if that isn't enough to make you suspicious, consider what "AHS" creator Ryan Murphy told Deadline in 2013.

There was a point last year where I was like, 'I want to do an entire season about the [Charles] Manson case.' But then we decided that wasn't respectful to the victims. ... We might go back to the Manson thing one day," Murphy said.

Looks like we'll have to wait and see. "American Horror Story" season six is set to premiere Sept. 14 on FX.

This video includes an image from Getty Images. Music by MADS / CC BY 3.0.