Gun Rights Advocates Say Nothing Has Changed One Year After Vegas 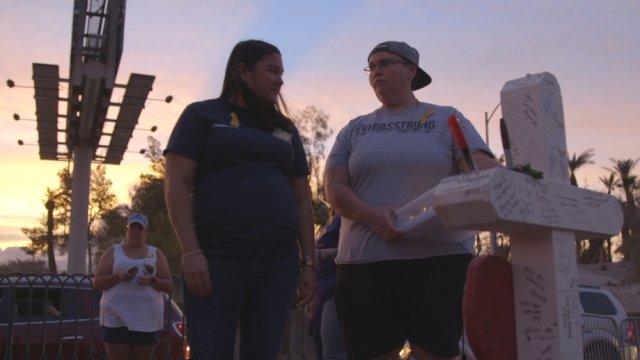 Nevada has yet to pass a single change to its gun laws following the country's deadliest mass shooting, but it doesn't mean gun control advocates haven't tried. In fact, they were trying before the shooting. A 2016 ballot initiative, known as question one, would have expanded background checks to private gun sales.

Right now, background checks only apply to licensed gun dealers in brick and mortar stores. The state of Nevada conducts those checks. Online purchases, gun show purchases and private sales did not need a check. The measure would require those to be checked by the FBI. 16 of 17 counties voted against the measure, but it squeaked by by 10,000 votes.

Advocates for the initiative say it will stop people who would otherwise be barred from buying guns from getting them privately. Online gun sales through websites like "Armslist" are increasing in Nevada. Everytown for Gun Safety says 35,000 people shop online for guns in Nevada every year. That's seven times higher than people who try to buy guns at a licensed dealers and are blocked.

The new law would include some exceptions. Elizabeth Becker for Moms Demand Action supported the expansion two years ago. She says the way things are right now are dangerous.

"What wouldn't be exempt would be if you had a private gun and you wanted to sell it to me, we could right now meet in a parking lot and sell it for cash, and there is no way to tell who had the gun, who bought the gun," Becker explained.

Governor Brian Sandoval and Attorney General Adam Laxalt have essentially blocked the measure. The FBI says they won't pay for the private checks and the Nevada officials say it makes the initiative unenforceable.

Gun rights advocate Nephi Oliva says he's glad the governor and AG are fighting the measure. "What bothered me about Question 1 was that it was mis-marketed," he said. "It sounds good on the surface. There were elements that made sense. But if you read, there was things that was like, 'No, you can't do that.'" 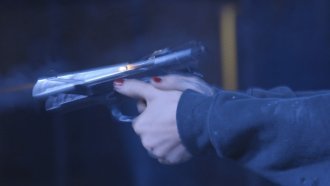 He's Teaching Las Vegas Shooting Victims How To Use Guns. Here's Why

After the shooting, activists renewed their efforts to enforce the measure and filed a lawsuit. The case made it to the Clark County District Court. Judge Joe Hardy, Jr., who was elevated to the bench by Governor Sandoval, sided with the governor in recent weeks. He said Question 1 didn't tell the governor how to implement the law.

"I think that ruling is short sighted because he had other options as well. He could have changed the wording himself," said Becker.

"If you are going to add restrictions for criminals, then you also in the same law have to clear a path for the legitimate people, who have not done anything to lose their constitutional rights, to not lose those rights," added Oliva.

Attorney General Laxalt is in the middle of a contentious race for governor with Democrat Steve Sisolak. Laxalt's running on his decision to block the initiative, which sits well with voters like Oliva.

"Guns are not going anywhere," he said. "I don’t care how many gun control measures you pass. The guns are still going to be here."

The plaintiffs are planning to appeal the case, which means it could make it all the way to the Nevada Supreme Court.