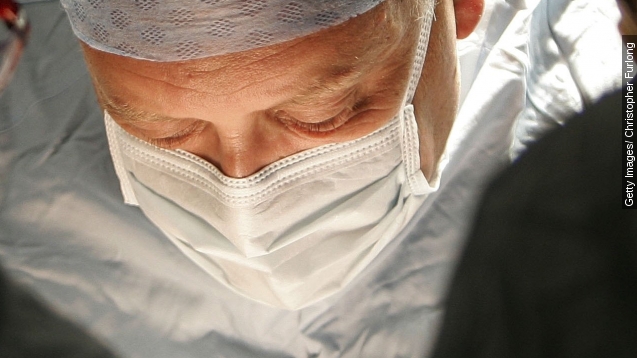 Imagine standing in a slow-moving line with 100,000 other people. It's frustrating, right?

Now imagine doing that when your life depends on it.

The simplest kidney chain involves four people: One person wants to donate a kidney to a loved one, but isn't a match. So that person donates a kidney to a compatible stranger in exchange for an immediate kidney — donated by a fourth person — for their loved one in need. (Video via Visual Health Solutions)

Last week, 18 people in San Francisco underwent surgeries that swapped nine kidneys in 36 hours. In 2012, the New York Times covered a chain between 60 people, and just this past April, 26 hospitals across the country connected for the largest chain yet — 68 people and 34 new kidneys.

Orchestrating a kidney donation is difficult: The donor and recipient must have matching blood types and antibodies, and they both need to be healthy. Even then, the body could reject the new organ.

A kidney chain helps someone's odds of finding a perfect match, even if it's from a complete stranger. But there are other challenges involved, such as transporting a human organ on an airplane to another hospital. (Video via The New York Times)

The first known four-person kidney swap was performed in 2000 in Rhode Island, but the first chain, involving 16 people paying it forward, was led by UCLA doctors in 2008. (Video via UCLA Health)

The concept has gained momentum since then, which is good news for Americans waiting for a transplant. (Video via The Doctors)