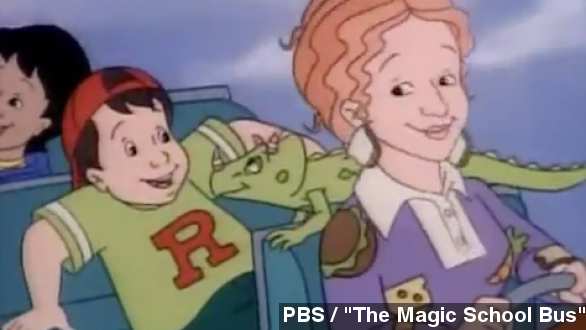 By Adam Falk
June 11, 2014
Netflix is bringing "The Magic School Bus" back to the small screen with 26 episodes of a show based on the original coming to the service in 2016.
SHOW TRANSCRIPT

90s kids, another one of your childhood favorites is driving, flying –

Jezabel reports, “The show will essentially be the same, except with the kind of fancy schmancy digital upgrades you expect from remakes these days.”

Like, for example, the new series’ name, “The Magic School Bus 360.” That just sounds futuristic. (Via Scholastic)

The New York Times reports the show will also use CGI to bring kids an updated bus and, of course, a modernized “Ms. Frizzle.”

Since then, Netflix’s CCO tells The New York Times,  ”'Magic School Bus,’ the old version, is remarkably popular on Netflix. It teaches science in a way that transcends generations.”

“The series also features the latest tech innovations such as robotics, wearables and camera technology to captivate children's imaginations and motivate their interest in the sciences.”

But we know the question you’re all asking. And unfortunately, we don’t have an answer.

Time reports, “No word yet on who will sing the new theme tune — Little Richard performed the original — but our expectations are high.”

“The Magic School Bus 360” will launch with 26 half-hour episodes on Netflix in 2016. And if this doesn’t have you feeling nostalgic –

– we’re sure the “Reading Rainbow” Kickstarter campaign or perhaps the Power Rangers movie announcement brought you back.