Netflix's New Deal With Verizon: Just The Next Domino? 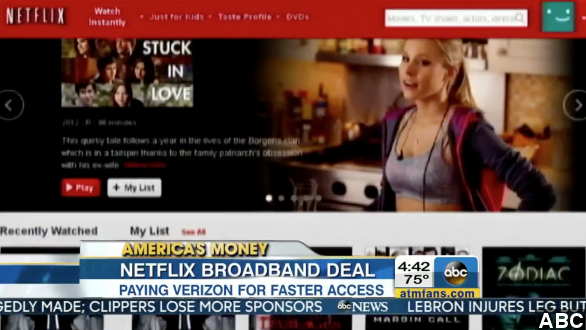 SMS
Netflix's New Deal With Verizon: Just The Next Domino?

By Cliff Judy
April 29, 2014
Netflix's second deal with a major ISP to provide faster downloads and smoother service has many wondering if this is the new standard in online vids.
SHOW TRANSCRIPT

Fear not, Verizon and Netflix users! Your streaming video is about to get a lot smoother. The rest of us will have to wait for faster speeds and, presumably, higher prices.

DIANA PEREZ, ABC ANCHOR: "The company has agreed to pay an undisclosed amount for more direct access to Verizon's FiOS broadband network. Netflix cut a similar deal with Comcast back in February."

​MSNBC CORRESPONDENT: "We all know what it's like and how frustrating it is when our streaming is slow. They've already signed a deal with Comcast. Now, they're signing a deal with Verizon to ensure that it's quicker."

And Netflix's VP of Communications for Europe replied less than an hour later, "We have reached an interconnect arrangement with VZ that we hope will improve performance for customers over the coming months."​ (Via Twitter / @jorisevers)

To say Netflix made the deal grudgingly is a lot like saying the company's streaming video takes up just a little bit of bandwidth. Huge understatement.

Netflix has long argued internet service providers unfairly slow down its streaming video content, leading to a war of words over who should ultimately pay for access. (Via The Wall Street Journal)

The company, which has now blown away critics in creating original content like "House of Cards," said ISPs would effectively make customers pay twice. (Via Netflix)

And there's the rub. ISPs like Verizon and Comcast point out Netflix's 36 million U.S. streaming video customers take up huge swaths of bandwidth — estimated in November at nearly a third of the country's downstream traffic. (Via Mashable)

So with not one, but two deals now made by Netflix, many tech experts predict deals like this become the new standard in an increasingly competitive streaming video world. Time reports AT&T has already expressed an interest in reaching a similar arrangement with Netflix.

But at what cost? As with most any deal involving what we presume to be a large amount of money, the cost is often passed down to the consumer and Netflix already announced last week prices will go up by a buck or two in the coming months. (Via CNN)

The FCC does not consider this a case of net neutrality where Internet users should have equal access to all public sites because Netflix is a paid-peering service.

The company released this chart of its average download speed by ISP for March, which showed Comcast jumping six spots in the month after the two companies struck a deal. Verizon may be about to make a similar leap. (Via Netflix)