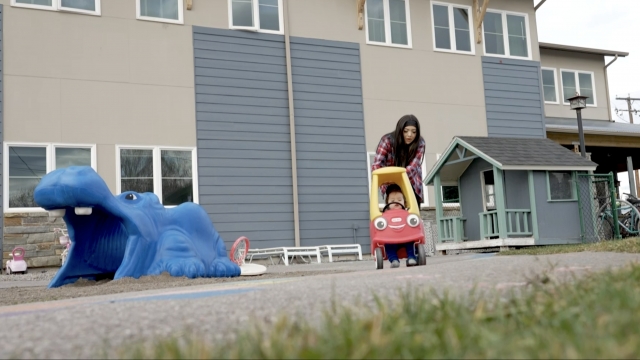 The author of "Maid" hopes the series can help others find help and talk about their experiences.

The Netflix series "Maid" caught the attention of millions.

The heavy story is a gripping look at domestic abuse, poverty, homelessness and single motherhood, based on Stephanie Land's memoir. For her, it means living it all over again.

"They got it so right and just so, so real," Land said. "I mean you can see the terror in her face from only having two bucks in your pocket, and that's exactly what it's like."

Land is the first to say her story is one of privilege because she's white.

"I would hope the popularity of this story is clearing some space for others to stand up and  talk about their experiences," Land said.

Experiences like that of Jill Norton — a member of the Confederated Salish and Kootenai Tribe now raising her young son, Charlie, alone after surviving domestic abuse.

"Statistically Native woman have a higher rate of being abused," Norton said. "Having both parents struggle with alcohol and him being native... he has three things against him, and that's like my biggest fear — my son to fall into what I  did — so I'm trying to break that cycle."

However, she's not one of the millions who have seen the show.

"It's literally my life," Norton said. "I was like, I don't need to watch it because, I was like, it's gonna trigger me. "

The storyline is familiar: a single mother at 18 trying to find a safe place to go after fleeing abuse.

"We've had families show up at our doorstep that actually don't have a winter coat, have been sleeping under a bridge and have used the back of a car throughout the winter months in Montana, and that's just unacceptable," Steph Goble from Mountain Home Montana said.

About 20 names constantly fill the shelter's waiting list. It provides a home for young mothers between ages 16 and 24, but they have fielded calls from girls as young as 12.

"The impossible task is trying to figure out who gets in the door," Goble said.

Norton says without the shelter, she "probably would have been dead."

The Netflix miniseries is now on the top ten TV list of all time for the streaming giant, surpassing the record set for a limited series by "The Queen's Gambit." Its popularity put the memoir back on the New York Times Best Seller List. It also means a heightened awareness of what the Mountain Home staff sees every day, from poverty to violence.

"I think if there's any message that that Steph's created through her book, and through the Netflix series, and that Mountain Home tries to scream from the rooftops is that there can be healthier, happier futures, and we will help anybody wherever they are on that path to get to them," Goble said.

Organizations across the country are seeing a difference. The Netflix series donated clothing and film set materials to shelters where it filmed.

Land partnered with a local bookstore to donate a portion of new book sales back to Mountain Home Montana to help others like Norton. They received orders from around the world.

"She's made a story that I would argue any human can watch and pull something from," Goble said. "I would ask our societal system to just listen because there are stories out there that we can learn from."

"It's not all stressful and traumatizing, but it's also supposed to make you feel stressed out and just so that you can maybe understand what it's like to be in that situation," Land said.

"I want to support any mom because I know how it is," Norton said. "I probably would not be here without Charlie. He literally saved me. I think that's like the key to everything — just pour your whole entire self into being a good mom."

If you are living with domestic violence, Stephanie Land suggests talking to someone. There are shelters like Mountain Home Montana across the country, along with the National Domestic Violence Hotline at 1-800-799-SAFE, or you can text "START" to 88788.