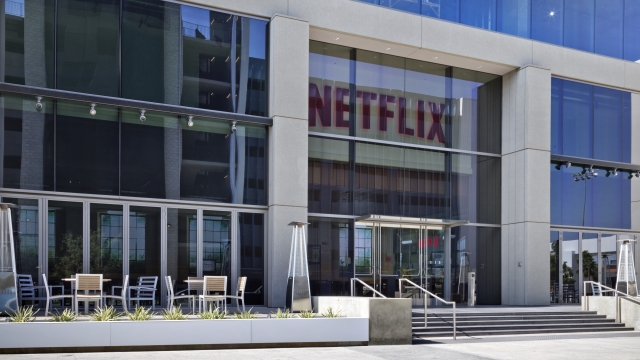 SMS
Netflix's Latest Earnings Report Shows A Calm Before The Storm
By Casey Mendoza
By Casey Mendoza
October 16, 2019
Despite upcoming competition from Apple and Disney, Netflix is pretty confident it can stay on top.
SHOW TRANSCRIPT

"Fundamentally, there's not a big change here. It is interesting that we see both Apple and Disney launching basically within the same week after 12 years of not being in the market, and I was being a little playful with 'whole new world' in the sense of the drama of it coming."

Netflix just released its quarter three earnings report. But before we get into the nitty-gritty, let's address the elephants in the room.

In Netflix's letter to investors, the company stated: "The upcoming arrival of services like Disney+, Apple TV+, HBO Max, and Peacock is increased competition, but we are all small compared to linear TV. While the new competitors have some great titles ... none have the variety, diversity and quality of new original programming that we are producing around the world."

From that statement, you can see that Netflix doesn't seem too concerned about competition, and recent studies support that confidence.

Beyond upcoming competition, Netflix's quarter three earnings report follows one of the biggest trends set from quarter two: slowing membership growth in the U.S. That's because of Netflix's increased prices in the country. But that financial miss is balanced out by strong international growth.

The streaming company says it added 6.3 million international subscribers to the platform, which is 23% more than last year during the same quarter.

"We're in our fourth year of producing local-language originals at scale, and we're excited about continuing to expand it. What's the nice part is, I think people will enjoy a global film or a global series every so often, love to see themselves on screen, and we're able to deliver on both of those propositions for our members around the world."

A recent report from Parrot Analytics found that Netflix captured more than 60% of worldwide demand for digital original series this summer. Two of the biggest titles? "Stranger Things" and "Lucifer."

Beyond that success with original series, Netflix is also quick to point out the success of its original films. "Secret Obsession" and "Tall Girl" each garnered more than 40 million household views in their first month on the platform.

And going forward into quarter four, Netflix is building on that slate of original films. "The Irishman," "Marriage Story" and "The Two Popes" are already major Oscar frontrunners.

"Movies are very valuable. People are used to paying for a lot of that. And the slate that Ted [Sarandos] and his team have this quarter and for next year is way better than any movie slate we've ever had. So, you know, there's some great room for optimism there, too. So we just have to focus on the members, and I think it will shake out very well."