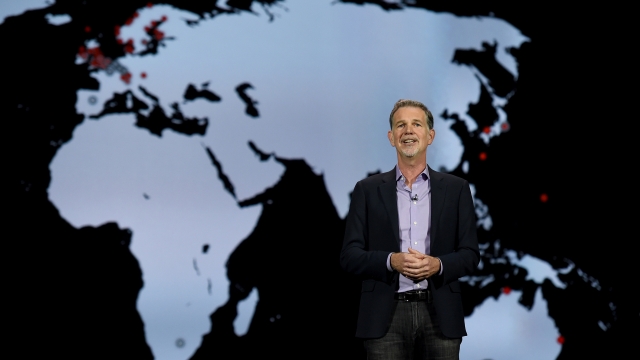 Netflix has a head start on the international streaming market, but that doesn't mean HBO Max and Disney+ are running behind.

"We were also the first to release stories across a global footprint."

"The Netflix service has gone live in nearly every country of the world, but China — where we hope to also be in the future."

This announcement was made three years ago.

Netflix still isn't available in China, but it is now in 190 other countries — boasting 150 million paid subscribers around the world. Despite slowing growth in the U.S., it's the most in-demand global streaming company, and that's something that'll be hard for new platforms to compete with.

"I think we've seen shows like 'Stranger Things' right now that plays almost completely globally, performing off the charts in every country in the world. We saw similarly last quarter with 'Umbrella Academy,' a show that is incredibly a global show. So, there's plenty of content that is global and there's a lot of content that's very, very specifically local, and we're balancing constantly between those two."

Beyond projects developed in the U.S., Netflix's Chief Content Officer Ted Sarandos pointed out the success of Germany's "How To Sell Drugs Online," Denmark's "The Rain" and Sweden's "Quicksand."

"What's been amazing is they've been deeply relevant in the home country, traveled the region very, very well and it found global audiences. So the three shows I just mentioned from Germany, Denmark and Sweden have 12 to 15 million global watchers. So we're seeing some real locally, regionally and globally relevant content coming from all over the world."

Netflix currently has the leg up on this worldwide success, and its main competitor right now is Amazon Prime Video.

HBO Max told Newsy it would disclose additional information in the fall, but the streaming platform's launch will likely only be domestic. The same goes for Disney+, which is launching in November. It's not clear yet if that puts those companies at a disadvantage, but one expert says it won't.

Courtney Williams, Head of Partnerships at Parrot Analytics, said in a statement to Newsy: "Neither HBO Max nor Disney+ are engaging in a 'cold start' for their new offerings, both of them have significant existing demand for their shows around the world. ...In my opinion, launching first in one of the world's largest TV markets, and their home market, will allow them to build their offering and strategy to take the most advantage of their demand in international markets when they launch in the future."

While those new platforms develop their strategies in the U.S., Netflix is further entrenching itself in other countries.

One of its most competitive markets? India. Earlier this summer, Netflix unveiled a new mobile-only streaming plan in the country. It costs about three dollars a month, and it's meant to appeal to the country's smartphone users.

Beyond the new plan, Netflix is also heavily investing in original Indian content.

"We announced five new originals for India. The one we're also really excited about later on this year is 'Baahubali,' which is our first step into a really large-scale Indian original film. ... And we've been seeing steady, nice steady increases in engagement with our Indian viewers that we think we can keep building on. Growth in that country is a marathon. So we're in it for the long haul and we're seeing nice steady progress."