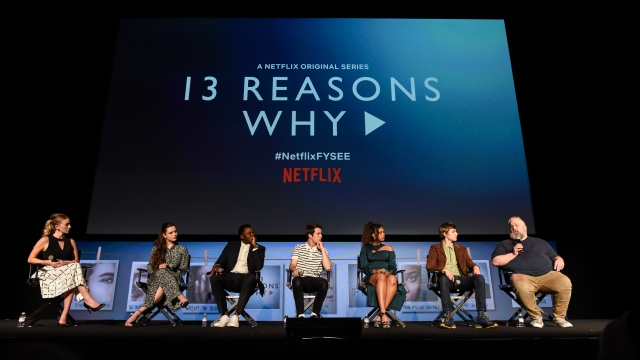 In the lead up to Netflix's "13 Reasons Why" season three release, it was revealed the show's creator cut a controversial scene depicting suicide from its first season.

The original scene, which is close to three minutes long, shows protagonist Hannah Baker killing herself in graphic detail.

Writer Nic Sheff said he personally pushed to put the scene in the show, citing his own attempt to kill himself. In a 2017 Vanity Fair op-ed, Sheff wrote he felt it was important to show viewers "the ultimate reality that suicide is not a relief at all —  it’s a screaming, agonizing, horror."

Show creator Brian Yorkey echoed Sheff's reasoning in his decision to cut the scene. He said in a statement Monday, "Our creative intent in portraying the ugly, painful reality of suicide in such graphic detail in Season 1 was to tell the truth about the horror of such an act, and make sure no one would ever wish to emulate it," saying he believes the edit will lessen "any risk for especially vulnerable young viewers."

Suicide prevention organizations are applauding Netflix's decision to remove the scene. The American Association of Suicidology said Netflix, "clearly want[s] to do what's right for their viewers."

Some critics are saying the decision is two years too late, arguing it resulted in higher numbers of suicide. But that's tough to prove. The latest data from the Center for Disease Control and Prevention shows suicide was the tenth leading cause of death in the U.S. in 2017. That's the same year season one of "13 Reasons Why" was released. But even if the CDC released updated stats through 2018 on the topic, it would be difficult to know how many, if any, suicides were triggered by the show.

But researchers at Northwestern University found the show may have been beneficial to some viewers. A study, commissioned by Netflix, found that after watching season one, nearly 60% of viewers reported talking to their parents about issues they saw depicted in the show. Nearly half of the teens in the study said they reached out to say sorry to someone they treated poorly and 56 percent of adults who watched the show reported finding it easier to talk to their kids about difficult topics.