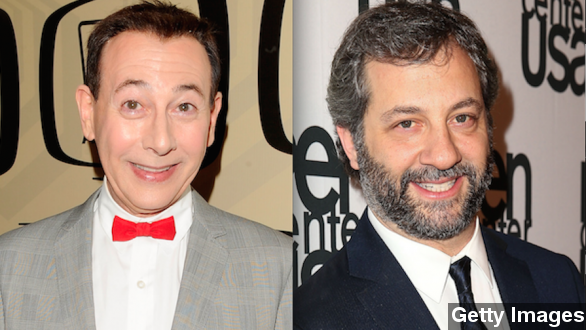 Pee-wee Herman is back with a brand-new adventure. Netflix said on Tuesday production on a new Pee-wee movie is starting this year.

The news had been talked about for months, but now we know the details. The movie is called "Pee-wee's Big Holiday." Judd Apatow will produce, and some other fresh comedy faces are involved, too.

Paul Rust wrote the movie with Paul Reubens. Rust has worked on projects like the revival of "Arrested Development." And John Lee, who's directed episodes of "Inside Amy Schumer," will make his feature film debut.

As a reminder, in 1985 "Pee-wee's Big Adventure" was Tim Burton's feature film debut. And that worked out pretty well.

Yes, one legendary comedy name and one big current one — not a bad pairing. Apatow and Reubens have been working on the movie for about four years. According to the release, it's about when "a fateful meeting with a mysterious stranger inspires Pee-wee Herman to take his first-ever holiday."

Now Deadline says Netflix is the perfect place for Pee-wee, saying since it's been 30 years since his last movie, this will be a way to get access to big audiences without spending a lot of money.

But that "Netflix is a nice middle-of-the-road choice" attitude is quickly seeming dated, especially since Netflix announced a deal for four movies with Adam Sandler in October.

Although his last movie, "Blended," disappointed at the box office, Sandler has long been known as one of Hollywood's most bankable stars: He was a big get for Netflix.

Sixty-two-year-old Reubens first created Pee-wee Herman as a character at famous Los Angeles comedy theater The Groundlings back in 1981. His show was picked up for a special by HBO, then followed by major motion pictures, the Saturday morning show "Pee-Wee's Playhouse" on CBS and multiple Emmy wins.