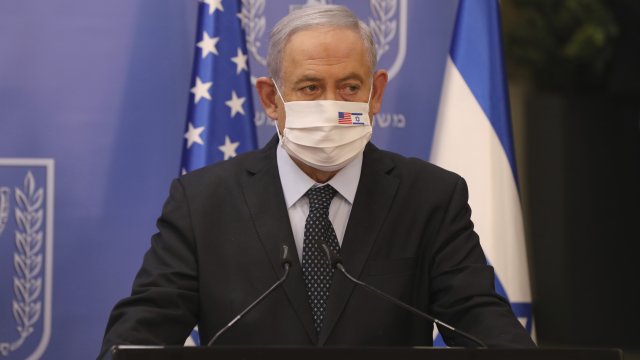 SMS
Israeli Prime Minister's Corruption Trial To Resume In January
By Alex Arger
By Alex Arger
July 19, 2020
An Israeli court Sunday rejected a plea by Netanyahu's lawyers to delay the corruption trial because of the coronavirus.
SHOW TRANSCRIPT

The Israeli court ruling on Sunday was a rejection of Netanyahu's effort to postpone his trial on bribery and fraud charges that allege he accepted gifts from billionaire friends seeking favors.

Netanyahu wasn't required to appear at the Sunday court session, and it's not clear if he'll be present in person for the January trial.

A lawyer for Netanyahu argued that a trial would be unfair with coronavirus restrictions, asking the court, quote, “How can we carry out a cross-examination when I am in a mask, the witness is in a mask and I don’t know if your honor is angry or happy?”

A lawyer for Netanyahu argued that a trial would be unfair with coronavirus restrictions. He suggested cross-examinations would be difficult because he would be in a mask, the witness would be in a mask and he wouldn't be able to see if the judge "is angry or happy."

The three-judge panel rejected the plea to delay the trial saying all sides would have to endure the same restrictions, even if masks are still required in January.

Netanyahu's legal struggles have helped fuel protests against him. On Saturday, Israeli police used water cannons to disperse protesters outside his home.

Netanyahu is also being pressured for his handling of the coronavirus pandemic. Many believe his emergency government ignored rising virus numbers to quickly reopen. And the country's billions of dollars in aid haven't been fully distributed, while Israel's economy and unemployment numbers get worse.

As Netanyahu sees his approval ratings plummet, he has called the prosecution against him a "witch hunt."