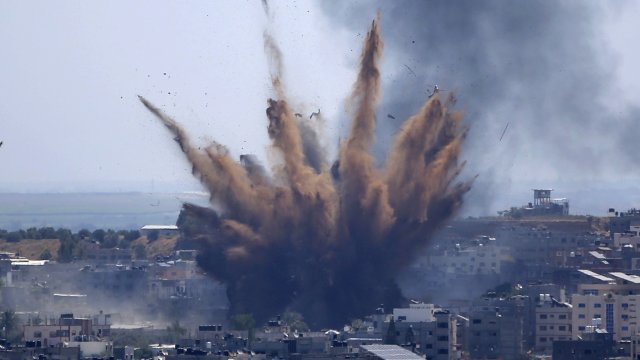 A grim weekend in the Middle East — more than 40 dead in Gaza City from Israeli air strikes.

In Gaza, prayers for peace amid the destruction, funerals for lost family members and survivors, some... searching through rubble, or, stuck under it.

Among the dead were at least 17 members of the same family.

"If Hamas thought they could just fire rockets and sit back and enjoy immunity, that’s false. We are targeting a terrorist organization that is targeting our civilians, and hiding behind their civilians, using them as human shields."

In Israel, eight people have been killed, including a 5-year-old boy and a soldier in fighting that broke out last month.

Over the weekend, Israel bombed a 12-story building in Gaza that included the TV network Al-Jazeera along with several floors of apartments.

Among those killed were 12 women and eight children, with another 50 wounded, and some... still waited to be rescued.

International mediators are attempting to broker a cease-fire where both sides can declare some sort of victory.

Dozens gathered near the Israeli Embassy Saturday to call for a peace deal...

"We need to speak out about our human cause, for the Palestinian cause, to support those under attack."

Meanwhile, the 57-nation Organisation of Islamic Cooperation opened an emergency meeting Sunday, issuing a statement in solidarity with the Palestinian people and a two-state solution.

Palestinian Foreign Minister Riad al-Malki said any peace agreement needs to include the end of what he called the occupation of Arab and Palestinian lands by a racist Israel.

In the U.S., the Biden administration expressed support for Israel. Rep. Adam Schiff, chairman of the House intelligence Committee, echoed that.

“Every rocket that Hamas sends into Israel is a deliberate effort to kill civilians. And I think that we need to understand that these rockets are indiscriminate, and are by definition designed to kiIl civilians. Israel has a right to defend itself, but has to use every effort to avoid civilian casualties," said Schiff.