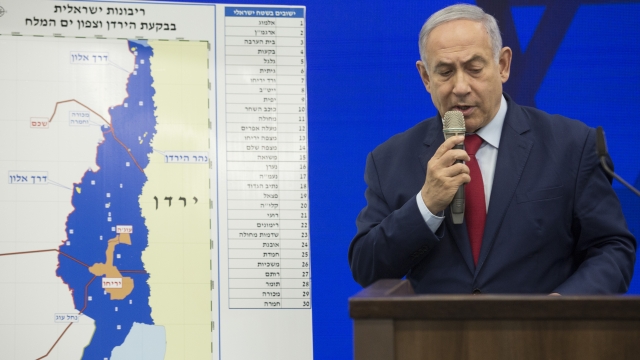 Fifty-two years ago, over six days, Israeli troops reshaped the map of the Middle East. With lightning raids into Egypt, Syria and Jordan, they captured vast territories, including Palestinian regions in the West Bank and Gaza Strip.

Ever since, the West Bank between Jordan and Israel has remained one of the world's most contentious pieces of real estate. It is key to Palestinian hopes for a sovereign nation, under a peace deal that would include East Jerusalem as its capital. To the Israelis, the occupied territory is critical to its security.

Palestinian leaders say Netanyahu is trying to cement a military conquest by taking territory that is home to 65,000 Palestinians as well as 11,000 Jewish settlers. They say his move would encircle a potential Palestinian state inside a Greater Israel, an action that would kill the peace process.

Undeterred, Netanyahu declared Tuesday: "We haven’t had this kind of opportunity since the six-day war, and may not have it again for another 50 years."

Some critics inside Israel called the move an election gambit. Netanyahu is up for reelection on Sept. 17 in a hotly contested race. And in his announcement, complete with a map, he explicitly appealed to his conservative base, making his reelection a referendum on annexation.

"Today, I am announcing my intention to apply Israeli sovereignty to the Jordan Valley and the northern Dead Sea," Netanyahu said. "I will not do anything without getting a clear mandate from the public. And so, the citizens of Israel, I ask you for a clear mandate to do this."

The Palestine Liberation Organization accused the Israeli leader of "an ethnic cleansing agenda" that amounts to "a declaration of war against the Palestinian people's rights." And members of the Arab League, meeting in Cairo, said: "The Arab League regards these statements as undermining the chances of any progress in the peace process and [they] will torpedo all its foundations."

Netanyahu additionally is pledging to annex Jewish settlements in the West Bank, another move complicating a potential two-state solution. In total, 650,000 Israelis live in more than 100 settlements built there since the 1967 war.