Netanyahu Gave In To Political Right's Pressure Over UN Deal 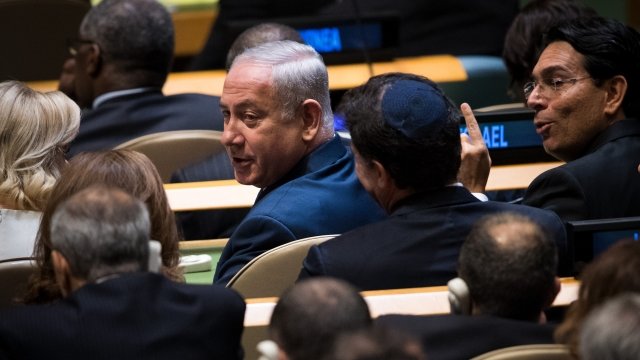 On Monday, Netanyahu announced he had signed a deal with the United Nations to resettle roughly 16,000 African asylum-seekers residing in Israel to Western countries. An equal number would be granted temporary residency status in Israel.

While many Israelis have welcomed the migrants, some conservatives and nationalists there are not happy that about 35,000-39,000 African asylum-seekers are in their country. Some say they want Israel to stay a Jewish state. Politicians have referred to migrants as "infiltrators."

Earlier this year, the Israeli government offered those migrants a choice: Take a $3,500 voucher and leave Israel, or go to prison. But many of the migrants are Sudanese and Eritrean nationals who risk persecution or worse if they return to their home countries.

The now-canceled deal with the U.N. would have replaced that policy. But shortly after its announcement, many Israelis on the political right came out strongly against it, saying the deal would make Israel an "infiltrator's paradise" and set a precedent for future immigration policy.

Analysts were also quick to point out Netanyahu's personal situation as a reason for his sudden about face: The prime minister is involved in three separate corruption investigations, and police have recommended he be charged with bribery. Netanyahu has denied any wrongdoing. But his critics saw the flip-flop as a way of maintaining support amid the ongoing investigations.