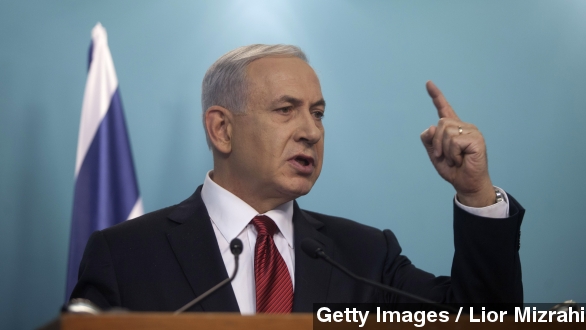 Some of which include the national budget, low-cost housing projects and a bill that would declare Israel a Jewish State. (Video via YouTube / IsraeliPM)

Netanyahu said he felt the two ministers "harshly attacked" his policies and leadership. He also said, "I will not tolerate an opposition within the government anymore."

Government officials say Netanyahu's decision to break up his cabinet wasn't a huge shocker given the tumultuous trek they've had in the short-lived 20 months together. At any rate, why dissolve now, and what's Netanyahu's motive here?

The New York Times reports last week's battle over labeling Israel a Jewish State was the final straw, and Israeli political analysts say it's really about putting more like-minded right-wingers on his team.

"[Netanyahu] simply had enough of his fractious coalition partners and wanted a more manageable government made up of rightist allies and the ultra-Orthodox parties he has long considered his natural partners."

Netanyahu has also battled plummeting public-opinion numbers since the 50-day war with Hamas in the Gaza Strip ended in August — reportedly dropping from 77 percent approval during the peak of the conflicts to just 38 percent as of Sunday. (Vide via Israeli Defense Forces, RT)

That war, in addition to a number of recent violent conflicts between Israelis and Palestinians, have some wondering if he's putting the public in danger.

Netanyahu's former campaign manager told the Journal, "If we have a referendum on the incumbent in a couple of months and his numbers are in the 30s, I would say he’s jumping from the 10th floor without a safety net." And what's more: voters seem indifferent to an early election.

"What's interesting is that many Israelis don't see the point of these elections. It does come down to clashing personalities. That last election ... was only 22 months ago," said a CNN correspondent.

In the event early elections do take place, they could reportedly occur as soon as next March. If so, most say it's likely Netanyahu will seek a fourth term.