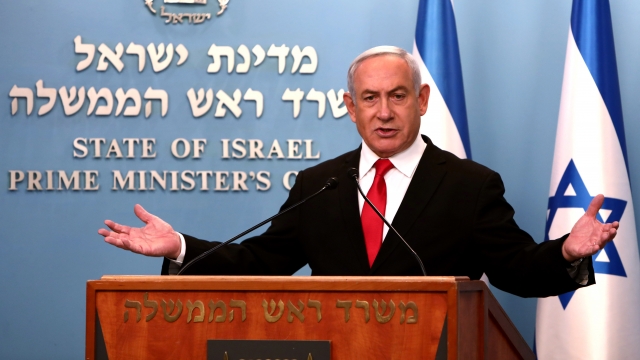 SMS
Israeli's Netanyahu Accused Of Using Coronavirus To His Advantage
By Meg Hilling
By Meg Hilling
March 19, 2020
Some political opponents in Israel argue that Netanyahu is exploiting the coronavirus to hold onto control.
SHOW TRANSCRIPT

Israel's Prime Minister Benjamin Netanyahu is being accused of using the coronavirus outbreak for political advantage, reports the Associated Press.

Political opponents point to Netanyahu and his supporters shutting down the court system, increasing surveillance, and adjourning parliament as ways he is exploiting the coronavirus crisis to protect himself. Netanyahu is struggling for control following a third inconclusive election in less than a year.

Netanyahu's trial on corruption charges, initially scheduled for March 17, was postponed following the government order to suspend all non-urgent court activities in order to reduce the spread of the virus.

Netanyahu has defended most of the moves as necessary to deal with the coronavirus pandemic. Like many countries, Israel is considering a nationwide lockdown to stop the virus.

Additional reporting by Aron Heller of the Associated Press.