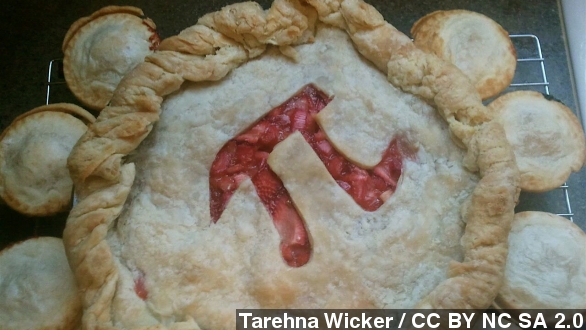 SMS
Nerd Alert! Saturday Is Super Pi Day
By Kate Grumke
By Kate Grumke
March 13, 2015
For the only time this century, the date will line up to perfectly match the first five digits of pi. Here's a look at how some are celebrating.
SHOW TRANSCRIPT

A nerd holiday set for this Saturday will be especially awesome this year. No, not Albert Einstein's birthday, although that is also Saturday. This will be the first perfect Pi Day in a century.

So why is pi so special? The number represents the ratio of a circle's circumference to its diameter.

As Smithsonian Magazine writes: "Pi has held an almost mystical quality to humans throughout time. Its unspoken presence can be felt in the circular ruins of Stonehenge, in the vaulted ceilings of domed Roman temples and in the celestial spheres of Plato and Ptolemy."

Scientists everywhere are getting pumped for the special day. Neil deGrasse Tyson tweeted: "Crazy Pi-Day nears. But only if you write the month first, the day second, and a two-decimal truncated year third. 03/14/15."

And MIT will follow its tradition of announcing who got in on Pi Day, so the next generation of leaders in science, technology, engineering and math will find out Saturday if they got in to arguably the best engineering school in the country. (Video via Massachusetts Institute of Technology)

Plus, there are tons of celebrations across the country.

In 2009, Congress officially recognized the holiday, encouraging teachers to talk about the irrational number and engage in pi-related activities on Pi Day. With it hitting on a weekend this year, that probably happened the day before.

And in Chicago the Illinois Science Council is holding a Pi K run. Instead of 3.1 miles, the run will be 3.14 miles. (Video via Video4Good)

For nerdy couples looking to get married, a chapel in Vegas has a Pi Day special — for $314.15, lovers can get married and get a free apple pie. Who needs wedding cake?

If you really want to get specific and extend the pi numerals out a few more digits, you have two chances to celebrate the most perfect pi time in most of our lives. Go crazy at 9:26 a.m. or p.m. ... and 53 seconds.