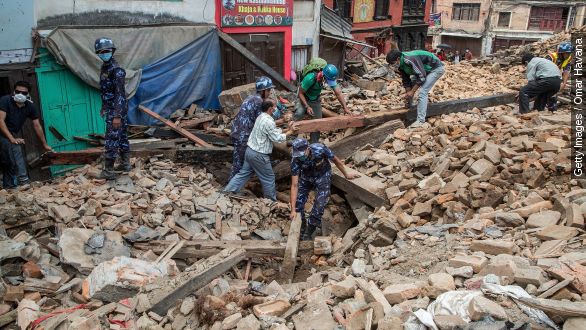 SMS
Nepal's Earthquake Could Cripple Its Vital Tourism Economy
By Matt Moreno
By Matt Moreno
April 27, 2015
An estimated 3-4 percent of the country's GDP comes directly from tourism. Saturday's earthquake could change that, though.
SHOW TRANSCRIPT

Mount Everest is host to hundreds of visitors every year, yet some never return. After Nepal's devastating earthquake Saturday, world traveler Carsten Lillelund Pedersen posted this video to his "Use The World" Facebook page Sunday showing just how massive the aftershock avalanche was.

On Sunday, Pedersen wrote "hundreds" were stuck on the mountain due to the earthquake and subsequent avalanches.

Saturday's massive earthquake, combined with Sunday's sizable aftershock, has killed at least 19 people on the mountain and injured many more. (Video via NDTV)

Despite the dangers, Everest is still a huge part of Nepal's tourism sector — which accounts for some 3-4 percent of the country's gross domestic product. But there's a good chance that will take a hit after Saturday's earthquake. (Video via PBS)

"Tourism is one of the few drivers in the economy. Foreign climbers pay up to $100,000 to climb Mount Everest. That industry clearly at risk, considering the danger," CNN reported.

Nepal brought in nearly 800,000 tourists in 2013, more than double what the country saw a decade ago. The majority of them are there for vacation or mountaineering. The World Travel and Tourism Council notes tourism-related jobs accounted for 7 percent of the country's employment in 2014 — which is a lot, considering the unemployment rate there sits around 46 percent, according to the CIA's most recent figures. (Video via Nepal Gateway Treks & Tours | Google)

Popular tourist destinations have been hit, including one of Kathmandu's main tourist attractions, the Dharahara Tower, which was reduced to rubble.

And if others are wary about making the trek after the deaths in Everest's avalanches, that could hurt Nepal financially.

As of Monday, more than 3,800 people were reported dead due to Saturday's earthquake, and even more were injured. It's expected to cost the country some $5 billion to rebuild.

This video includes images from Getty Images and Francisco Anzola / CC BY 2.0.