Nepal Hit By Another Major Earthquake 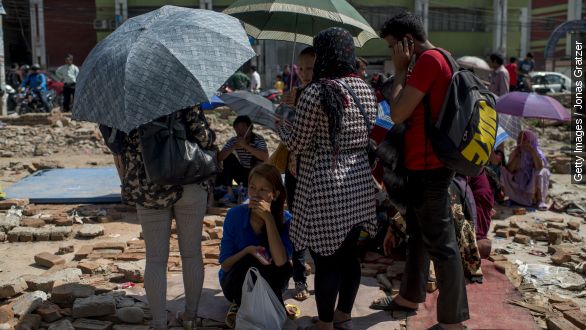 SMS
Nepal Hit By Another Major Earthquake
By Jake Godin
By Jake Godin
May 12, 2015
The U.S. Geological Survey measured Tuesday's earthquake at a magnitude of 7.3 with the epicenter near the Chinese border.
SHOW TRANSCRIPT

Less than three weeks after the country was hit by a massive quake that left 8,000 people dead, Nepal is dealing with another major earthquake.  (Video via UNICEF / Thomas Nybo)

Dozens are thought to have died from the quake with outlets reporting more than 40 deaths by midday Tuesday. The toll may very well rise, as it did with April’s quake. (Video via Kantipur Television)

This footage from Nepal’s state broadcaster shows the country’s parliament during the moment the quake hit.

The U.S. Geological Survey measured this morning’s earthquake at a magnitude of 7.3 with the epicenter near the Chinese border. The USGS measured April’s earthquake at 7.8. (Video via The Telegraph)

Last month’s earthquake badly damaged Nepal’s cities, destroying buildings and leaving substantial debris, which is still being cleared. The country has seen numerous aftershocks since but nothing as large as Tuesday's quake.

A BBC reporter was in Nepal’s mountains when this most recent earthquake struck.

“In the past two and a half weeks I’ve felt several tremors but what was very striking about this one was how long it went on for.”

While Tuesday’s earthquake was large, the BBC’s science correspondent suggests it may not be as devastating since any structurally weak buildings may have already been felled after last month’s quake. (Video via Nepal Television)