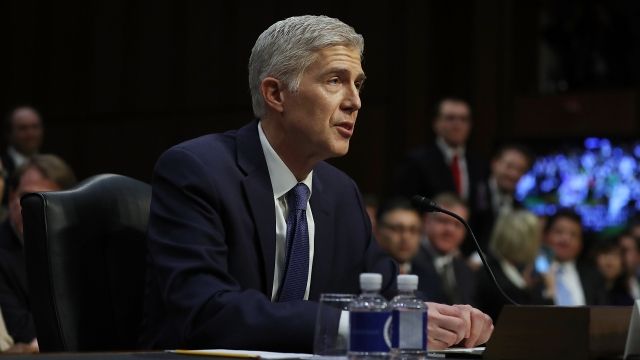 Sen. Dianne Feinstein was just one of the Democrats who expressed concern about Gorsuch taking on the lifelong role of Supreme Court justice.

And the tone of the senators' opening statements seemed heavily influenced by party affiliation.

Sen. Dianne Feinstein of California and other Democrats on the committee used their statements to criticize the Senate's handling of Judge Merrick Garland's failed nomination.

"I am concerned when I hear that Judge Gorsuch is an originalist and a strict constructionist. Suffice it to say, the issues we are examining today are consequential," Feinstein said.

"Some liken it to the action of the tyrannical kings who claim that they have sole control," Sen. Patrick Leahy of Vermont said.

According to one of his former students, Gorsuch told his class that female job seekers "manipulate" companies for maternity leave.

But the Republicans in the room painted a much different picture, defending Gorsuch's abilities as a judge.

"Judge Gorsuch's legal experience is well known. He has the highest level of professional qualifications, including integrity, competence and temperament," Sen. Orrin Hatch of Utah said.

"If you believe this has been a great plan to get a Trump nominee on the court, then you had to believe Trump was going to win to begin with. I didn't believe that," Graham said.

If Gorsuch is confirmed, he will re-establish a narrow conservative majority on the nation's highest court. The seat has been empty since Justice Antonin Scalia died in February 2016.