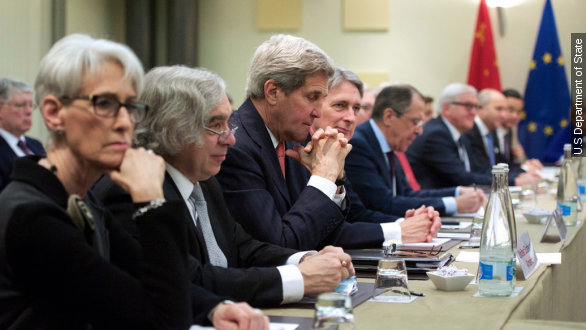 "Today, we have taken a decisive step. We have reached solutions on key parameters of a joint comprehensive plan of action," European Union foreign affairs chief Federica Mogherini said during a press conference. (Video via C-SPAN)

After eight days of marathon talks, world leaders have reached a framework for a nuclear agreement with Iran, setting the stage for a final deal this summer. (Video via C-SPAN)

It's a deal that would delay by months the time it would take Iran to build a bomb, should Iran decide to do so. And that, President Obama said, is better than the alternative.

"Do you really think this verifiable deal, if fully implemented, backed by the world's major powers, is a worse option than the risk of another Middle East war?" Obama asked.

As for the specifics, Iran will retain just one enrichment facility, and its Fordow nuclear complex will be converted to a nuclear physics research center. Additionally, Iran's heavy water reactor at Arak will be redesigned so it can't produce weapons-grade plutonium. Finally, Iran has agreed to slash its number of centrifuges from about 19,000 currently installed to 6,104.

Next — and this is key — once inspectors confirm Iran's compliance, the U.S. and European Union will lift all nuclear-related economic sanctions against Iran.

"And if we find out at any point that Iran is not complying with the agreement, the sanctions can snap back into place," Secretary of State John Kerry said.

There was plenty of skepticism over whether a deal would be reached at all. Thursday's announcement comes two days after negotiators blew past the original, self-imposed deadline of midnight Tuesday.

Of course, the deadline that really matters is June 30. That's when a full-fledged final agreement is due.