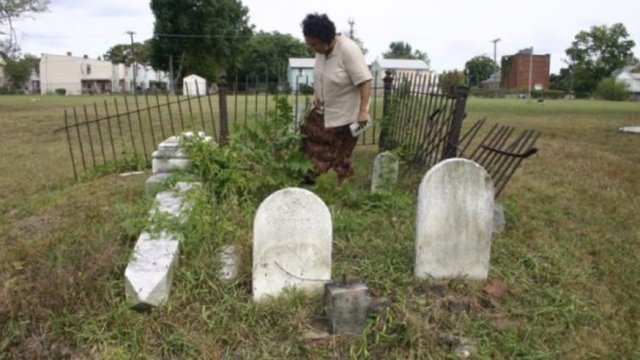 SMS
Neglecting Black Cemeteries Threatens Black History
By Newsy Staff
By Newsy Staff
June 16, 2022
As late as the 1950s, one estimate was that about 90% of all private cemeteries in the U.S. still practiced some form of racial restrictions.

Preserving history helps to understand a nation and people's roots, but accessing personal and communal history is not always easy, especially for people of color.

This is especially true for the African American community. There are still new signs of lost Black history today — one of which can be found in America’s cemeteries.

Like with much of Black history, the problems can be traced back to slavery. Before emancipation, enslaved African Americans were largely buried on plantation grounds or land owned by white people, many using nothing more than rocks as grave markers. There wasn’t much of an effort to ensure that the buried had proper identification or any sort of tribute to who they were as a living person, and it wasn’t much better for freed African Americans. They were often buried in potter’s fields with minimal or absent markings.

After emancipation, several African American cemeteries emerged, either on the land of Black churches or created by Black citizens. As late as the 1950s, one estimate was that about 90% of all private cemeteries in the U.S. still practiced some form of racial restrictions.

That’s because cemeteries weren’t considered “public accommodations” and did not qualify for civil rights protections. But in May 1948, the Supreme Court ruled in Shelley v. Kraemer that state enforcement of racially restrictive land deeds violated the equal protection clause of the 14th Amendment.

That ruling had a major impact on the ability of Black Americans to buy houses and land in white neighborhoods and also helped desegregate many cemeteries. As a sign of the slowly changing times, several interracial cemeteries appeared in the 1950s.

But since Black communities and their white counterparts still lived in different neighborhoods, many of their cemeteries remained separate too. As the racial composition of communities changed over time, many of the Black cemeteries and grave sites became neglected and forgotten. In both public and privately owned cemeteries, upkeep wasn’t a priority, and the resting places of countless unsung Black heroes of America’s past quietly disappeared, many beyond recognition.

"Typically, especially in urban environments, especially in the South, you won't know," said Eric Prendergast, project archeologist at Cardno. "You'll be walking down the street or walking through a yard or actually through a building, and underneath your feet is the cemetery. There has to be a lot of archival work and community memory work that's done to restore the place."

Prendergast has been involved in the discovery and exploration of neglected Black grave sites in Tampa, Florida. Archaeologists like him are echoing the sentiment many descendants of the Americans buried in Black cemeteries have stressed: When it comes to uncovering the stories of who is buried in the neglected sites, you can’t leave any fallen headstone unturned.

"Because if you think about it, those headstones, even the the handmade ones, those are inscriptions of love and respect," said Brian Palmer, founding member of Friends of East End Cemetery. "They may be the one of the few or the only record left of someone who had been property or the child of a person who had been property."

Palmer is a journalist who volunteers his time to discover and protect Black cemeteries in Richmond, Virginia with the non-profit Friends of East End Cemetery. At the group’s namesake East End cemetery alone, Palmer says thousands of graves were left neglected, overrun by weeds or showing the heavy wear of time. That’s a problem that several similar volunteer-run initiatives are trying to address around the country, with many asking local authorities to finally address the historic neglect.

Recently, there have also been some federal efforts to properly preserve that history, but progress has been slow. In 2020, the Senate passed the African American Burial Grounds Study Act, hoping to create a database of historic Black burial grounds and provide grants for research and preservation under the National Park Service. But that original bill was never taken up by the House. A similar bill is once again in the House, but many like Palmer say that legislation still ignores the wishes of the Black community and gives too much control to private entities that may own the cemeteries.

"That replicates this tendency, this kind of post-Jim Crow tendency, to discount, to disregard the descended community, which should be equal partner, should be at the table with a vote, not just a voice in determining the future of these burial grounds," Palmer said.