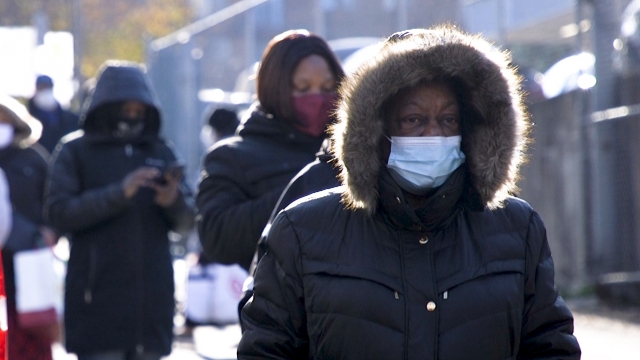 The Hamilton Project says 1 in 10 U.S. families with small children doesn’t have enough to eat.

Hattie Lambert was third in line Tuesday morning to get a free frozen turkey at a food bank in Washington, D.C.

She arrived before dawn, waiting for hours as a crowd formed behind her and snaked out of sight.

"The line is completely around the corner," said Lambert, 70. "Things haven't been so good this year because of the coronavirus, and everybody is suffering with that."

Americans are accustomed to long lines at the holidays, usually at the airport.

This pandemic year, the lines are for more basic needs: health and food.

Central Union Mission in Washington is among food pantries nationwide seeing a surge in requests for meals.

"This year has been especially difficult," mission spokeswoman Deborah Chambers said. "We've seen over a 50 percent increase in the number of people coming to us to receive services."

There was a bumper-to-bumper wait in cars for food outside Boston.

One in ten families with small children nationwide doesn’t have enough to eat, according to research at The Hamilton Project, part of Brookings.

The level of need jumped at the start of the coronavirus outbreak and is still higher than during the Great Recession.

"A lot of those jobs that they have are in the service industry," Chambers said. "So those jobs have disappeared and now they find themselves having to come to a food bank."

In many big cities, waits are also long to get a coronavirus diagnostic test.

The hope is for a negative test result, and peace of mind, before joining family as cases of the coronavirus balloon.

The CDC says testing negative is no silver bullet and advises against travel and big gatherings this year.

The lines for COVID tests and food reveal the hardships and risks of 2020, and families intent on still sharing Thanksgiving together.