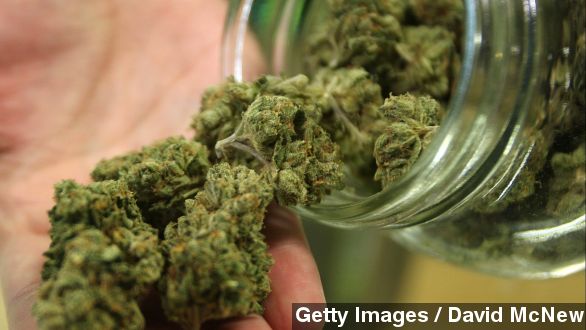 Two of Colorado's neighboring states have filed a lawsuit with the U.S. Supreme Court, claiming its law legalizing marijuana is unconstitutional.

The attorney generals of both Oklahoma and Nebraska sued Colorado in the nation's highest court, arguing Colorado's legal weed is being carried over state lines and sold illegally, placing a burden on their states' legal systems. (Video via KKTV)

"I'm bringing this lawsuit with my friend Scott Pruitt, the attorney of Oklahoma to stop Colorado's illegal marijuana law. ... While Colorado reached millions in the production and sale of pot, Nebraska taxpayers have to bare the cost," Nebraska Attorney General Jon Bruning said during a press conference.

The lawsuit states, "Colorado has created a dangerous gap in the federal drug control system. ... Marijuana flows from this gap into neighboring states, undermining Plaintiff States' own marijuana bans, draining their treasuries, and placing stress on their criminal justice systems."

And there appears to be some backing to that. USA Today says felony drug arrests have shot up 400 percent in the past three years in a least one Nebraska town near the Colorado border.

Meanwhile, Colorado's attorney general, released a statement saying, "It appears the plaintiffs' primary grievance stems from non-enforcement of federal laws regarding marijuana, as opposed to choices made by the voters of Colorado. We believe this suit is without merit and we will vigorously defend against it in the U.S. Supreme Court."

The communications director for Marijuana Policy Project agrees, telling The Huffington Post, "Nebraska officials are acting like bullies, and they have no business trying to dictate Colorado's marijuana laws. ... These guys are on the wrong side of history."

Currently, like most of the country, commercial marijuana is illegal in Colorado's six surrounding states. Colorado became the first state to legalize pot at the beginning of the year with Washington state, Alaska, Oregon and Washington D.C. following suit.

As for where the country stands on the issue, a recent Gallup poll shows 51 percent of Americans think pot should be legalized at the federal level — down from last year but still up from years prior.