Nebraska Gov. Says Farmers Have Been Hit The Worst By Flooding 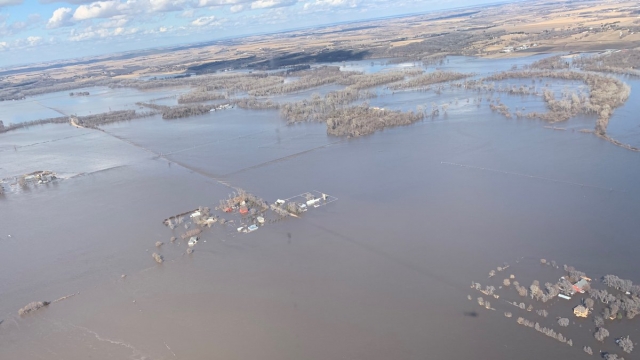 SMS
Nebraska Gov. Says Farmers Have Been Hit The Worst By Flooding

By Briana Koeneman
March 21, 2019
According to early estimates, over $1 billion worth of crops and livestock may have been lost.
SHOW TRANSCRIPT

Nebraska's governor says the devastating flooding that's left dozens of cities, counties and tribal areas underwater is "the most widespread destruction" in the state's history.

During an interview with CBS News, Gov. Pete Ricketts said Nebraska has a lot of recovery ahead of it. And it seems the state's farmers have been hit the hardest.

According to early estimates, over $1 billion worth of crops and livestock may have been lost in the flood. And with even more rain in the forecast, that number is expected to go up.

The historic flooding across the Midwest has left at least three people dead and damaged buildings, roads, bridges and more. States of emergency have been declared in Nebraska, Iowa, Wisconsin and South Dakota.