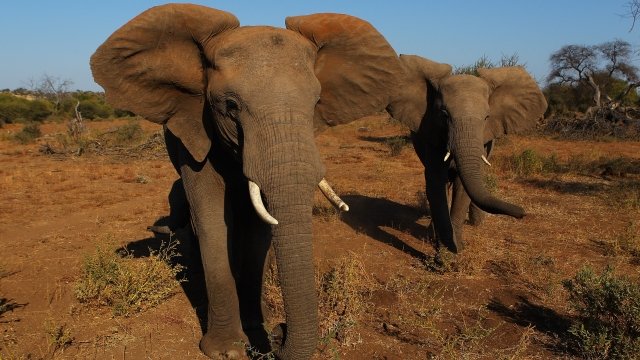 SMS
Nearly 90 Elephants In Botswana Reportedly Poached
By Audrey Esther
By Audrey Esther
September 4, 2018
The Botswana government says most of the elephants died from natural causes or retaliatory killings in human and wildlife conflicts.
SHOW TRANSCRIPT

Officials with the nonprofit Elephants Without Borders found the remains of nearly 90 elephants in Botswana that they say were poached.

Many of the skulls of the 87 elephants appear to have been mutilated in order to remove their tusks, which remain in high demand despite ivory product bans in some countries, including China.

According to Botswana's government, it has the world's largest elephant populations, and many wildlife conservationists consider it a safe haven for the elephants. But some conservationists say this discovery seems to be part of the country's worsening poaching problem, calling it unprecedented.

Wildlife conservationists also say the problem began to increase, in part, after the Botswana government took away military weapons and equipment from an anti-poaching unit earlier this year.

Government officials deny that claim. They also say they believe most of the recently discovered elephants died from either natural causes or retaliatory killings caused by human and wildlife conflicts.