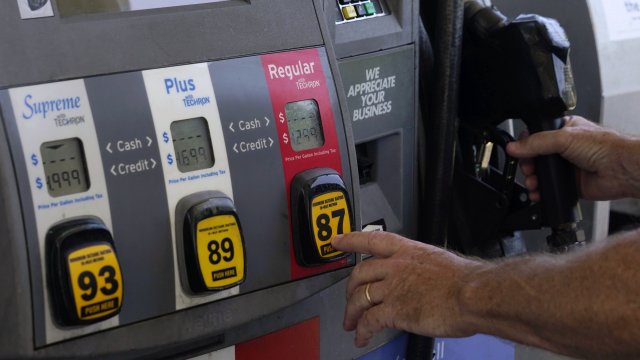 On one hand, the labor market is booming. The latest jobs report shows the unemployment rate stayed at 3.6% in May, a near- historic low.

But on the other hand, Americans can't ignore the steep price of essentials, like food and gas, straining just about everyone's budget.

"The grocery prices, and the inflation, and the things going up, and it's hard," said shopper Deborah Curtis.

"The president has made it clear inflation is his top economic priority, and he's laid out a very clear strategy for doing that," said Buttigieg.

"I think I was wrong then about the path that inflation would take. As I mentioned, there have been unanticipated and large shocks to the economy that have boosted energy and food prices, and supply bottlenecks that have affected our economy badly that I didn't at the time didn't fully understand," said Yellen.

Across the country, drivers are paying an average of $4.85 a gallon for gas, with at least nine states averaging more than $5. An analyst with GasBuddy warns we could see the average at $5 nationally by mid-June.

"There's no denying that high prices, particularly around gasoline and food, are a real problem for people. But there's every reason for the American people to feel confident that will meet these challenges," said President Joe Biden.

Despite the president's optimism, "That hurricane is right out there, down the road coming our way," said Jamie Dimon, JP Morgan Chase CEO.

A number of CEOs are addressing whether the Fed can cool inflation without causing a recession. Tesla CEO Elon Musk said in an email to executives Thursday he has a "super bad" feeling about the economy, adding the electric carmaker needs to cut about 10% of jobs.