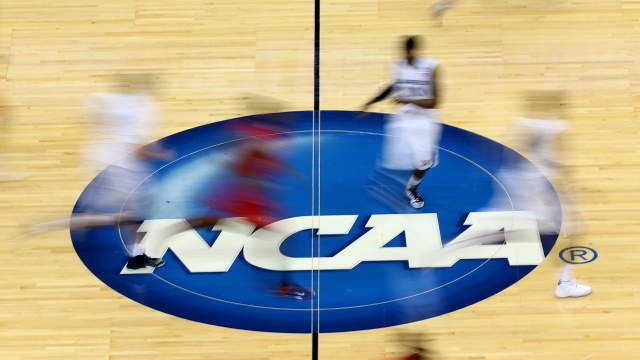 The NCAA's board said each division has to draft and enact the necessary rules no later than January 2021.

The NCAA, the national governing body for collegiate athletics, ruled Tuesday that student athletes will be allowed to "benefit from the use of their name, image and likeness." The NCAA said its decision followed months of input from "current and former student-athletes, coaches, presidents, faculty and commissioners across all three divisions."

In a statement, NCAA Board of Governors Chair Michael Drake said the organization "must embrace change to provide the best possible experience for college athletes."

The NCAA must also determine how to maintain rules on amateurism. The board has told each of the NCAA's divisions to draft and enact the necessary rules no later than January 2021. NCAA President Mark Emmert said that will be the biggest challenge going forward.

He said: "You get to choose your school. You don't get drafted. ... It's not like the Olympics where you play for the American team. And in that recruitment process is really part of the core of what constitutes anything like a fair, level playing field. And structuring a model for allowing students to monetize a name, image and likeness while maintaining some recruiting balance is one of the biggest and hardest issues that everyone's dealing with."

Drake said the NCAA oversees 500,000 student athletes and that it looks forward to exploring greater opportunities for them.

He said: "They're students first. They come to school to get an education. We support them, and that helps them prepare for the future. They're not our employees; we're not paying them for what they do on the field, and we want to make sure that we maintain that distinction. We want them to be students and not employees of our universities, and we think that's in the best interest of all involved."

Tuesday's ruling marks a 180 from how the NCAA addressed this issue just a month ago, when it called California's Fair Pay to Play Act "unconstitutional." The NCAA said at the time that such rules would give some schools an "unfair" recruiting advantage, and that those schools would be barred from competition.

So, what changed? One expert summed it up in one word: money. Evan Harris of the Pacific Research Institute, a free-market policy think tank, told Newsy California had "called the NCAA's bluff" over the state's lucrative sports market.

He said: "I think the flip was the fact that California is a huge market, and the NCAA, despite their leanings and pushback, they are driven by the free market in making decisions that will benefit them financially — and being on the right side of these issues. They couldn't really turn their back on the state — it was just too big."

Legislation similar to California's has also been introduced in New York, Illinois and Florida, and even at the federal level. Harris echoed the NCAA president's comments, saying it could take some time for all the details to be ironed out.

He said: "I think the key phrase is, they said, 'This will work in a manner consistent with the college model' — and, I mean, that's really the question. How do you do this? How do you dip into paying these athletes and maintain that student athlete term? I think it's going to be a wait-and-see in terms of, you know, you might have to throw everything out in terms of what this looks like."

Correction: A previous version of this story misstated Evan Harris' name. The story has been updated.