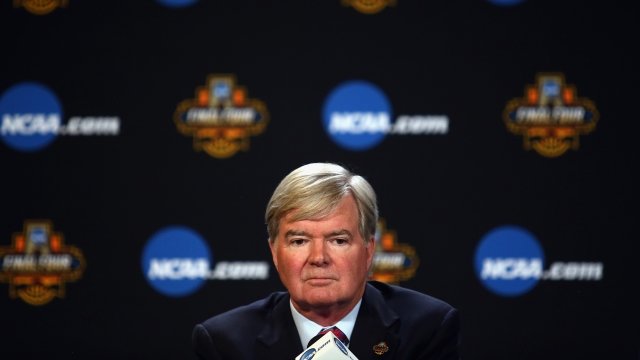 Major scrutiny of Michigan State University followed the Larry Nassar sexual assault scandal, with the school's president and athletics director resigning amid the fallout. Now, scrutiny is hitting a larger figure in the sports world: the head of the NCAA.

On Friday, The Athletic reported NCAA President Mark Emmert was first alerted to the issues in MSU's athletic department in 2010, six months after he took his post. At that time, there were at least 37 reports of athletes sexually assaulting women in the two years prior.

One of those reports, the alleged sexual assault of a woman by two basketball players, was specifically addressed in a meeting with Kathy Redmond, the founder of the National Coalition Against Violent Athletes. The accused — one of whom Redmond says confessed to the rape — reportedly remained at MSU with no clear punishment from the school, athletic department or NCAA.

After former team doctor Larry Nassar was convicted, the entire USA Gymnastics board resigned at the request of the U.S. Olympic Committee.

The incident, however, soon came under federal investigation by the Office for Civil Rights.

The agency reported that MSU's grievance procedures failed to comply with the requirements of Title IX, and that "the University's failure to address complaints of sexual harassment, including sexual violence, in a prompt and equitable manner caused and may have contributed to a continuation of this sexually hostile environment."

The NCAA is now investigating MSU's athletic department, but considering the group's history with sexual assault investigations, it's unclear what the outcome will be.

Redmond told The Athletic: "We know [the NCAA] haven't complied with federal law. They haven't been helpful with investigations. ... Mark Emmert, when he met with me, said the NCAA can't be 'state actors.'"