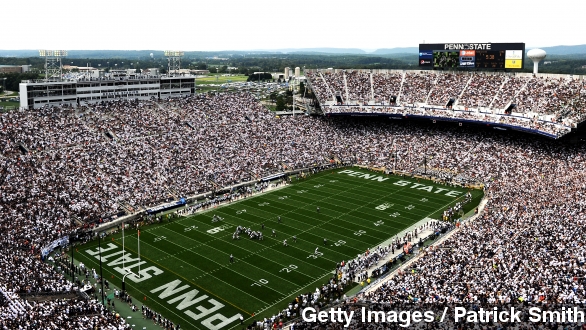 The NCAA has lifted its sanctions on Penn State, allowing 85 scholarships for its football team and making the school once again eligible for postseason play, only halfway through what was originally a four-year ban.

These were sanctions imposed after the Jerry Sandusky sex abuse scandal in 2012. The sanctions were originally intended to remain in place for another two years.

The NCAA made the announcement on Twitter saying the decision was made due to Penn State's progress in ensuring its athletics department operates with integrity.

The NCAA also released a report from the university's athletics oversight monitor, George Mitchell. Mitchell said the school has fulfilled every requirement put upon it by the NCAA and any further sanctions were only punishing players for their loyalty by choosing to remain at the school.

Sport Illustrated's Andy Staples agreed with that logic on Twitter saying the "NCAA should have never punished Penn State players in the first place. It was a criminal matter."

But USA Today writes that the NCCA is being too lenient by lifting the sanctions early: "The NCAA didn’t put in sanctions in place for four years because that’s how long it would take for Penn State to right the ship. It put them in place because Penn State had done the worst thing they could do as a university: Put the well-being of a football program ahead of everything — including protecting children from a predator."

The NCAA had already planned on returning a few of the scholarships to Penn State in 2015, so some concessions on the punishments against the school were expected.

But Bleacher Report writes the NCAA has done nothing to "reaffirm the legacy of Joe Paterno" or any of the other men involved in the scandal by adding the victories from 1998 to 2011 back to record books.

Now that the sanctions are dropped 2-0 Penn State will likely be eligible to compete in bowl games at the end of this season.