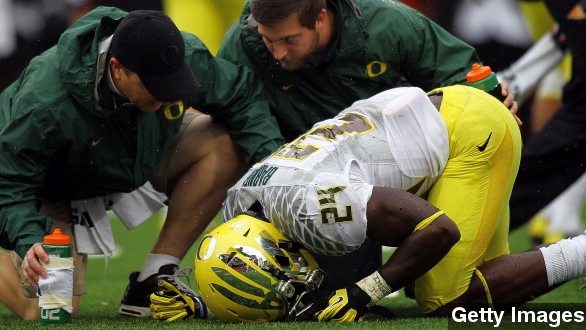 By Jay Strubberg
July 7, 2014
The NCAA's new guidelines aren't meant to be enforced but are aimed instead at creating a "cultural shift" in how the sport approaches concussions.
SHOW TRANSCRIPT

The NCAA is looking to create a "cultural shift" with a new set of guidelines for football teams to combat concussions, including a suggestion that teams limit live contact practices to two per week during the season.

The proposal came about when a large group of physicians, athletic trainers, sports' directors and others from several big-name football conferences met for The Safety in College Football Summit in Atlanta earlier this year. (Via Getty Images)

Here's a few new guidelines the summit came up with:

Teams can have only one "live contact" practice per day; no more than four per week during preseason play; no more than two "live contact" practices per week during the regular season; and each team should have a licensed physician on the sidelines with "unchallengeable autonomous authority" over anyone — including the coach — as to whether a player is fit to play or not. (Via Getty Images)

We used the word "should" because — to be clear — these are guidelines and not cemented rules. And that's exactly why the NCAA thinks teams will be more receptive to it.

​"When you build inter-association consensus, I think it speaks much more powerfully because it’s not simply the NCAA making a rule. ... We’d much rather have a living, breathing document that can shift based on emerging evidence."

But not everyone is a fan of the NCAA's new guidelines.

A leader for the College Athletes Players Association calls the news rules "a shameful PR attempt" by the NCAA. “They didn't pass rules, they passed guidelines. ... They're unenforceable. You don't leave the decision to a coach who's not accountable to anybody." (Via CBS)

And one other sport's writer wonders if the NCAA will even be liable if concussions continue to be a problem since the rules aren't set in stone. (Via Twitter / patrick_hruby)

The issue of football concussions has been hotly debated across the country and recently even spurred the Obama administration to take action.

In late May, the Department of Defense collaborated with the NCAA and announced a $30 million program funding what The White House calls "the most comprehensive concussions database ever." (Via SB Nation)

The campaign aims to study and track concussions and see how they "evolve" over time. (Via Getty Images)