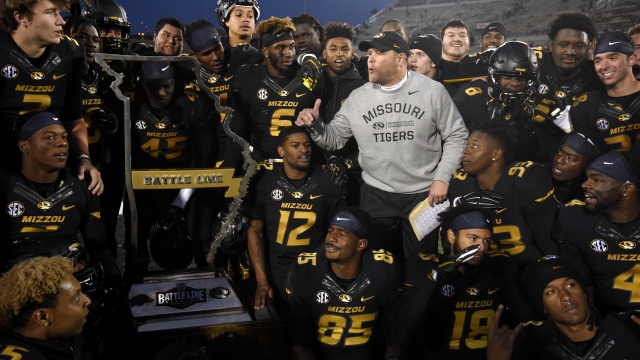 SMS
In Cases Of Academic Fraud, The NCAA May Have A Consistency Problem
By Casey Mendoza
By Casey Mendoza
February 1, 2019
The NCAA's latest ruling against the University of Missouri sparks criticisms of inconsistency regarding academic fraud.
SHOW TRANSCRIPT

At the end of January, the NCAA penalized the University of Missouri after it confirmed a tutor had done academic coursework for 12 student-athletes. That constitutes significant academic fraud, and the university is facing heavy punishments as a result.

Now embroiled in scrutiny, the case is highlighting one of the NCAA's biggest points of controversy: how it rules on academic fraud.

["Academic integrity and unethical conduct strike at the heart of the core of the NCAA values, so in this particular case, given the fact that parties acknowledged that this conduct occurred involved a case before us. The association prescribes those penalties so that's why the penalties were issued in this case."]

Before we dig deeper into the NCAA's decision, let's talk about the more widespread problem of academic fraud and college athletics.

["For example, the head coach personally completed coursework for a prospect, and enlisted an athletic trainer to do the same."]

A professor of sports administration told Inside Higher Ed in 2016: "It's an epidemic and a problem that will continue until faculty take control of their campuses."

That year, for the first time in more than three decades, the NCAA changed its rules about academic integrity and required student-athletes and athletic departments to adhere to the academic honor codes of their own schools.

That rule change is important to note, because it distinguishes some NCAA decisions — like the one regarding Missouri — from others.

["Please correct me if I'm wrong. The way I read that is that North Carolina stood by what it said and Missouri admitted violations. Had Missouri not cooperated or believed that they had no culpability for this. I mean, are they being penalized in part because they agreed with the findings prior to the ruling."]

Over the course of 18 years, the University of North Carolina was accused of "running one of the worst academic fraud schemes in college sports history" — by enrolling student-athletes in fraudulent courses.

In 2017, the NCAA acknowledged the extent of the fraud, but because the university stood by the classes and the practices, the association ultimately decided not to impose any penalties on the school.

Now, critics are comparing the case to the University of Missouri, which self-reported and acknowledged the violation of its honor code.

["In this particular case, Missouri did the right thing. It self-reported. It acknowledged and accepted responsibility. ... If they had chosen a different route, I couldn't predict what the outcome would be, but based on the facts that we received, the findings were appropriate, and the penalties were appropriate as dictated by the membership."]

At the heart of the criticism of the NCAA's decision is the idea of inconsistency.

The penalties that Missouri faces include postseason bans, recruiting restrictions, reductions in athletic scholarships and a fine of $5,000 plus one percent of the budgets for the school's football, baseball and softball programs.

Those penalties affect players who weren't involved in the cheating scandal — and some of the people who were involved may have already graduated.

Missouri's athletic director said the association "abused its discretion," and the school's chancellor said the school will appeal immediately.