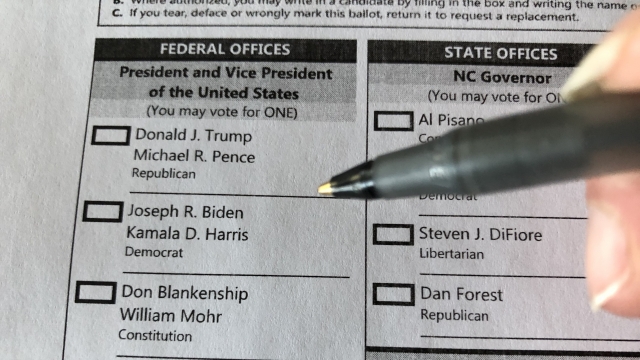 North Carolina voter Mark Sardelis took a photo of his completed mail-in ballot at home, then posted it on Facebook and Twitter to show support for his favorite candidates.

"No harm meant," Sardelis said. "And then I got a phone call."

The North Carolina State Board of Elections was on the line, ordering him to take down the pictures.

"She said they had people watching social media," Sardelis said.

The problem had nothing to do with who he supported — it was his sharing a picture of a filled-out ballot that got him in trouble in a state where "ballot selfies" are illegal.

The board of elections told Newsy it has ordered seven voters so far to remove photos of ballots shared online.

"We are simply informing voters that it's against the law in North Carolina," said board of elections spokesman Patrick Gannon in an email. "We don't want people to break the law, knowingly or unknowingly."

Laws against ballot pictures and videos prevent voter coercion and intimidation, even if limiting free speech, said E. Scott Adler, a political scientist at the University of Colorado Boulder.

"Our system of secret ballots, which is there for a specific reason, is to protect voters," Adler said.

Without secrecy, he said you could feel forced to reveal your votes.

"There are no laws that prevent an employer from firing an employee because of a political decision," Adler said.

Newsy found at least five states are forbidding ballot photos this election, including for mail votes.

In Georgia, photos of completed ballots are allowed so long as they're not snapped in a polling place, and 26 states plus Washington, D.C., allow all ballot photography.

North Carolina is the only state so far that appears to be sending notices to voters posting pictures.

"It just seems like there are other things they could be worried about right now than me photographing my ballot and putting it online," Sardelis said.

He took down his ballot photos and re-tweeted someone else's ballot selfie, rather than risk a fine or up to four months in jail.