An ICE Detainer Doesn't Hold The Same Weight As A Warrant 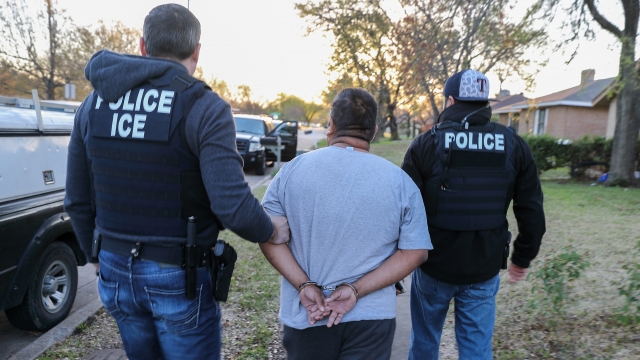 ICE issues detention requests for people it wants to deport, but some sheriffs in North Carolina has recently said they won't comply with them.

In North Carolina, cooperation — or the lack thereof — between local law enforcement and ICE has become a point of contention.

A handful of sheriffs in the state have recently said their departments will not comply with ICE detainer requests. One county sheriff used this description to validate his policy:

"However, a detainer request is not a valid warrant," Buncombe County Sheriff Quentin Miller said.

Jurisdictions that don't comply with ICE requests are typically called sanctuary cities, and it's an issue that's come up across the country. So let's look at exactly what ICE detention requests are and what they are not.

Detainers are issued for people ICE wants to deport, and they ask local law enforcement agencies for two things. First, ICE wants a 48-hour heads up before the immigrant in question is released. Secondly, detainers ask the local agency to keep that person in custody long enough for federal authorities to step in.

Detention requests have come up in more than a dozen key court cases, and multiple judges have ruled them unconstitutional. Many of the rulings say the detainers violate the Fourth Amendment because they are not probable cause for arrest.

Many Republicans oppose sanctuary cities. They argue that a federal law requires those locales to share immigration details with the government. In October, a federal judge ruled that law unconstitutional, but the Trump administration is appealing that decision.

So Sheriff Miller is correct — an ICE detainer doesn't hold the same weight as a warrant, which must be approved by a judge.