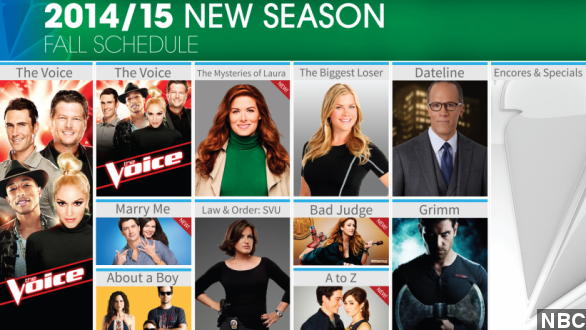 By Brice Sander
May 12, 2014
For the first time in more than 30 years, NBC won't air a two-hour comedy block on Thursdays. It's part of a plan to revive the struggling night.
SHOW TRANSCRIPT

It's an end of an era for NBC — the network is saying so long to "Must See TV" Thursdays.

The peacock net announced its new fall schedule over the weekend, and for the first time since 1983, there isn't a two-hour comedy block on TV's most lucrative advertising night. (Via NBC)

CBS' "The Big Bang Theory" delivered a big blow to NBC's so-called "legacy" night when it moved to Thursdays in 2010 — and when "The Office' went off the air last year, the network's lineup suffered even more.

Still, thanks to the Sochi Olympics, Sunday Night Football, megahit "The Voice" and freshman breakout "The Blacklist," the 2013-2014 season is NBC's best in years ... just not on Thursdays.

NBC plans to use "The Blacklist"'s success to revive Thursdays, moving the James Spader drama to the night next season. The Hollywood Reporter quotes NBC Entertainment Chairman Bob Greenblatt as saying the move "is to not only enliven our Thursday night lineup but also create two desirable timeslots -- lead-outs from The Voice and The Blacklist."

NBC will use those time slots to launch three promising new shows.

Katherine Heigl's return to TV in "State of Affairs," the Casey Wilson/Ken Marino comedy "Marry Me," said to be an updated version of "Mad About You," and spy thriller "Allegiance."

NBC is set to finish out the 2013-2014 season as the No. 1 network with 18- to 49-year-olds, the most coveted ad demographic — and its series orders and scheduling decisions show that's a title NBC wants to keep. (Via Ad Age)

There are just two ratings-challenged returning series coming back to NBC next season: critically acclaimed drama "Parenthood" and the Amy Poehler comedy "Parks and Rec," both for their final seasons.

Variety says NBC made all the right moves with its "smart" fall schedule taking advantage of its best assets.

Vulture agrees, calling the new schedule "aggressive." NBC changed up at least one hour every weeknight.

​The network will reportedly attempt a Thursday comedy launch at midseason, when CBS will pull "The Big Bang Theory" to air football. Forbes notes the net has a back stock of projects from Tina Fey, Ellen DeGeneres and Will Ferrell yet to be scheduled.

And E! points out NBC also has a few high-profile event series still in development, including the "Heroes" reboot and a sequel to Mark Burnett's "The Bible" miniseries.

We'll see how NBC's fall schedule stacks up against the competition when ABC, CBS and Fox announce their plans this week.