NBC Cuts 'Constantine' Short But Holds Off On Cancellation 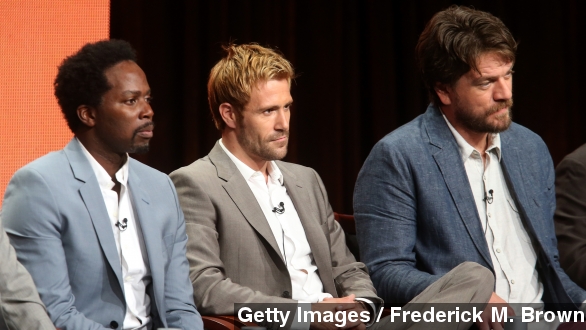 SMS
NBC Cuts 'Constantine' Short But Holds Off On Cancellation
By Ben Lawson
By Ben Lawson
November 24, 2014
NBC will cut off this season of "Constantine" at 13 episodes but is following the industry trend of waiting for more viewing numbers before canceling.
SHOW TRANSCRIPT

NBC has halted production on "Constantine," cutting the first season off at 13 episodes.

But the freshman, supernatural thriller hasn't been sent to the afterlife just yet. It's more like it's sitting in purgatory while NBC waits for more information about the ratings.

"Are you suggesting that it's not too late for me?"

Deadline reports the show is very much in contention for a second season, but the network was reluctant to extend its first season to a full 22 episodes until the show had proven itself ratings-wise.

This comes as networks seem to be placing less emphasis on the numbers of viewers watching the show live and more on extended viewing numbers.

Which is the reason Entertainment Weekly says networks seem more comfortable letting struggling shows hang around longer than they would have in years past.

The first show of this fall TV season to get the axe, "Manhattan Love Story," clung to life for four episodes, which is longer than it would have lasted in years past.

This is likely because viewers simply have more options beyond sitting down in front of the TV at the same time every week.

The New York Times writes, "Television programming is increasingly about timelessness and freedom of choice, with viewers deciding when they will watch programs."

Video streaming services like Netflix are likely to blame for people growing accustomed to that option.

But what really affects these network shows are services like DVR that record live television for people to watch later.

And that could be "Constantine"'s saving grace. Its fourth episode saw a ratings lift of 81 percent thanks to DVR.

Constantine still has eight more episodes to prove itself before NBC is set to make a decision about whether to keep the show afloat.