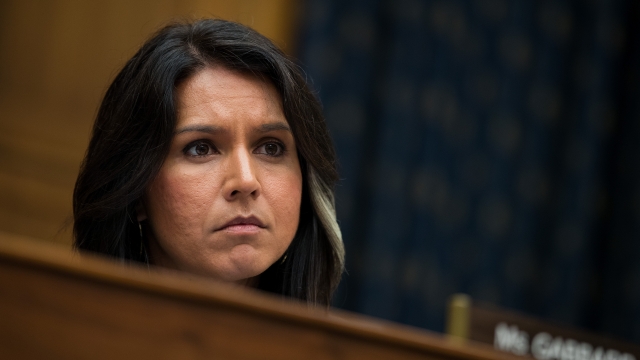 An NBC News report says Russian media outlets involved in 2016 election interference may be rallying around a Democratic presidential candidate for 2020.

Since Gabbard announced her intention to run, she's been the focus of twice as many stories as any other possible Democratic candidate, and she's treated much less critically — the Russian sites describe her as a "rebel" or "heroic."

The Intercept points out that NBC compared coverage of Gabbard to Bernie Sanders and Joe Biden, neither of whom has announced they'll run. So it stands to reason that a declared candidate would get more press. Then again, Gabbard still got more coverage than her fellow declared candidates Kamala Harris and Elizabeth Warren.

So, why Gabbard? It's not clear, but NBC points out that she responded to news that Russia interfered in the 2016 election by saying that the U.S. also interferes in elections.

On top of that, she's known for her controversial views on Syria, which happen to be in line with the Kremlin's.

The presidential hopeful believes "regime change wars" strengthen terrorist groups, and some consider her an apologist for the Syrian government. She met with President Bashar al-Assad in 2017 on a "fact finding mission" and has received major criticism for it.

The Russian publications have defended Gabbard's views on Syria and attacked anyone who links her to Russia.

A spokesperson said Gabbard has been involved in several bills intended to combat election interference and said it was "ridiculous" that Russia would openly support Gabbard if it actually wanted her to win an election.

The best video editor to ever come out of the Cowboy Capital of the World, "Trusty" Caleb left his small Texas town to pursue a Visual Editing and Management degree at The University of Missouri. When he's not editing like a madman, you can find him playing video games, exploring with his dog, or eating donuts. Caleb has worked at Newsy since 2011, but doesn't think his mom really believed that until they put his picture on this page.