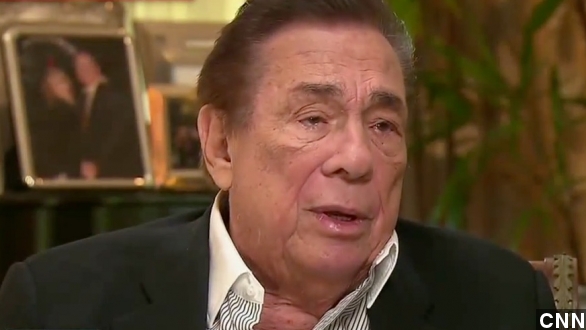 By Jamal Andress
May 19, 2014
The NBA has officially charged Donald Sterling and set a date for the fateful vote meant to force his sale of the Clippers.
SHOW TRANSCRIPT

Sound the opening bell, the NBA has officially charged Donald Sterling and set a date for the fateful vote meant to force his sale of the Los Angeles Clippers.

Monday the NBA released a statement claiming the defamed owner damaged the reputation of the league among other things.

Obviously the NBA is referencing the now infamous tape of Sterling talking to V. Stiviano where he says among other things. "Yeah, it bothers me a lot that you want to broadcast that you're associating with black people. Do you have to?" (Via TMZ)

But in a sign of just how poorly Sterling handled this controversy, the NBA is also drawing ammo from his would-be apology interview with CNN where after saying how sorry he was he went on to explain why Magic Johnson isn't a good role model.

"He acts so holy, he made love to every girl in every city in America and he had AIDS."

"I think he should be ashamed of himself."

Also referenced in the NBA's statement for the first time is a date for the owners to vote on Sterling's termination. June 3 the NBA will be looking for three-fourths of the NBA owners to vote for Sterling to sell the team.

But as many predicted, it seems Sterling will not be going quietly. According to USA Today and Sports Illustrated, Sterling has lawyered up and is refusing to pay the NBA's $2.5 million fine.

Sterling's lawyer reportedly said in a letter to the NBA that Sterling's comments do not warrant "any punishment at all."

Donald Sterling has until May 27 to formally respond to the NBA's charges.