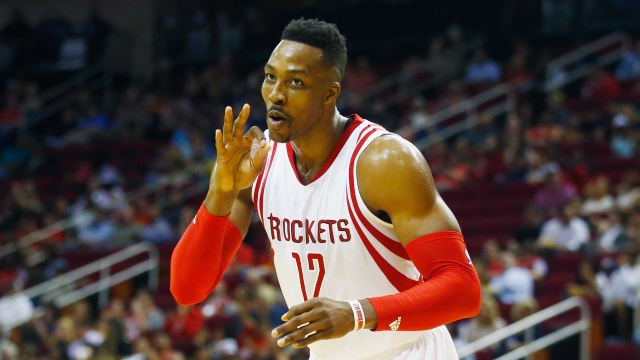 Houston Rockets star Dwight Howard is under investigation by the NBA for having sticky fingers — literally.

Howard’s Rockets were in Atlanta Saturday night to play the Hawks, when Atlanta's Paul Millsap lined up for a free throw — and noticed the ball was a little stickier than usual.

Turns out, Howard had just handled the ball and had sprayed his hands with a mysterious substance before checking into the game. Howard used a can at the scorer’s table that was covered with tape, perhaps to hide what it really was.

As you might expect, the referees on hand warned both benches about it, and Rockets coach J.B. Bickerstaff soon removed the can from the scorer’s table. Still, Howard didn’t seem too concerned after the game.

A beat writer for the Houston Chronicle tweeted Howard's response: "I don’t know why people are making a big deal out of it. I do it every game. It’s not a big deal. I ain't tripping."

You've gotta give Howard credit for coming clean here, though there’s a chance Howard might not know using stickum is against NBA rules, despite the fact referees reminded him during the game.

While Howard's use of stickum is surprising, the substance has turned up in other sports before. The gloves NFL players use are so tacky the league has considered looking into whether it’s too much of an advantage.

As for Howard, we'll just have to wait and see if the NBA penalizes him, which would be bad news for the Rockets. Houston already sits in seventh place in the Western Conference, just a game-and-a-half ahead of missing the playoffs.

This video includes clips from Memorial Hermann, CNN and ESPN and images from Getty Images.