NBA Finals: League MVP Vs. Best Player On The Planet 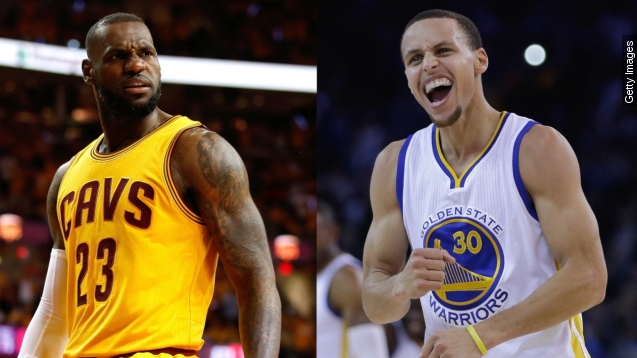 SMS
NBA Finals: League MVP Vs. Best Player On The Planet
By Jay Strubberg
By Jay Strubberg
May 27, 2015
The Golden State Warriors dispensed of the Houston Rockets Wednesday night, setting up an NBA Finals with Cleveland primed to be one for the ages.
SHOW TRANSCRIPT

Let's face it. It's the clash of titans NBA fans have been craving since the start of the playoffs. And now, it's happening: the league MVP vs. the best player on the planet.

After eliminating the Houston Rockets Wednesday night, Steph Curry and the Golden State Warriors will now square off with King James and the Cleveland Cavaliers in the NBA Finals. (Video via Unilever)

There's obviously a lot of variables with this matchup that can affect how either team will perform.

Will Kyrie Irving be healthy enough to play well? Can Draymond Green, or anyone really, contain LeBron? Will Steph Curry continue to make three-pointers look as easy as lay-ups?

This list goes on. But at least there's some history between the two teams.

The Cavs and Warriors met earlier this year, splitting their two regular season matchups, the home team winning each time.

In January, Steph Curry put up a double-double with 23 points and 10 assists, as the Warriors cruised to victory with their usual fast-paced, efficient offensive. But guess who didn't suit up for that one? (Video via Eastbay)

Yep, King James was nursing an injury, so he sat out. But that wasn't the case for their showdown in February. And the results were completely different. (Video via Nike)

The Warriors and Draymond Green, one of the best defenders in the league, couldn't stop No. 23. James dominated, dropping 42 points and went 19-34 from the floor.

But the playoffs are a different beast altogether. The Warriors are still soaring, while James has been doing a lot of the heavy lifting on his own with Kevin Love and Kyrie Irving sidelined due to injuries, which could end up being a huge factor.

"I think it all depends on the health of Kyrie Irving. If Kyrie Krving is 100 percent healthy ... He can guard Steph Curry on the same court with him. He's a guy with as good of ball handling skill as Steph Curry," ESPN's Tony Kornheiser said.

It's not like James has really needed their help lately, though. He's delivered with astonishing numbers, averaging nearly a triple-double in the Eastern Conference Finals.

No matter how you look at it, this NBA finals is poised to give us a matchup for the ages, as a Cavs-Warriors showdown caught the eye of the sports media even before the teams were set. Tip-off is Thursday, June 4 at Golden State.

This video includes images from Getty Images from Bensound / CC BY ND 3.0.