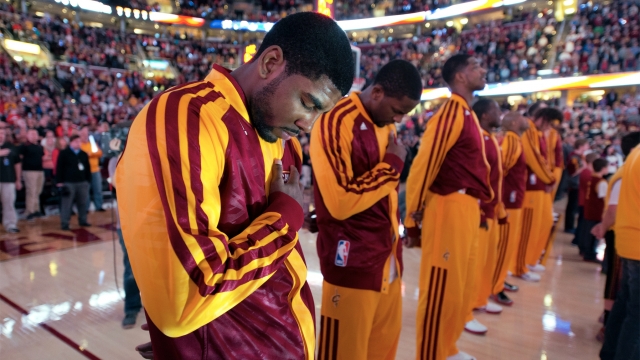 SMS
The NBA Doesn't Want Players Protesting The National Anthem
By Katherine Biek
By Katherine Biek
September 22, 2016
A letter to players mentioned "meaningful action" in regard to speaking out against recent police violence.
SHOW TRANSCRIPT

The NBA wants to get ahead of any protests that might happen during the national anthem when preseason games start in October.

It and the National Basketball Players Association sent out a letter to players Wednesday, asking for help in fostering programs that will spark "meaningful action" regarding police violence.

Interestingly, the letter, which an ESPN reporter obtained, doesn't mention national anthem protests in the paragraph about what that "meaningful action" might be.

That's probably because the NBA requires its players, coaches and trainers to stand for the anthem. It's in the rule book.

The NBA and WNBA are the only major professional sports leagues that actually have this kind of guideline.

But that didn't stop the entire Indiana Fever team from kneeling while the anthem played during a game Wednesday.

The team has a history of protesting police violence before games, but as of Thursday morning, the WNBA had yet to penalize them for this most recent one.

Unlike the NFL, which said it won't make players stand for the national anthem following San Francisco 49ers quarterback Colin Kaepernick's protest, other leagues approaches haven't been as lenient.

U.S. Soccer said players and coaches are expected to stand and honor the flag. And Team USA's hockey coach John Tortorella told ESPN he wouldn't play any player who sat during the national anthem.