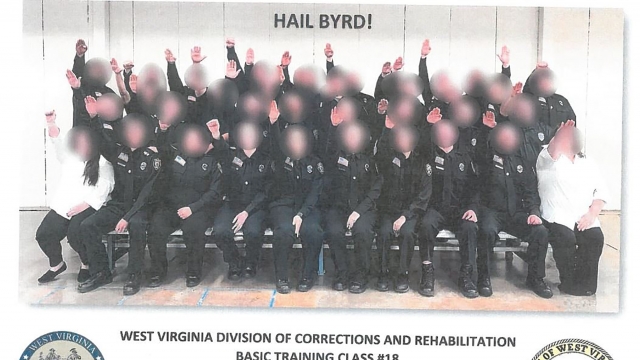 A photo showing a West Virginia correction training class giving a Nazi salute has lead to the suspension of employees.

An investigation is underway in West Virginia after a photo surfaced showing a corrections training class giving a Nazi salute, with "HAIL BYRD" written overhead.

Officials with the West Virginia Department of Military Affairs and Public Safety say the text refers to a training instructor for the class and that a number of employees of the West Virginia Division of Corrections and Rehabilitation have been suspended.

In a statement, the department's cabinet secretary said, "It is distasteful, hurtful, disturbing, highly insensitive, and completely inappropriate." He added, "it undermines the high standards that have been set for our Division of Corrections and Rehabilitation."

On Twitter Thursday, U.S. Senator Joe Manchin condemned the photo saying, "this behavior warrants an immediate investigation and anyone who participated in any hateful and disgusting action should not be able to work for or be paid by the federal or state government."

The department is working with faith and community leaders to make internal corrections.