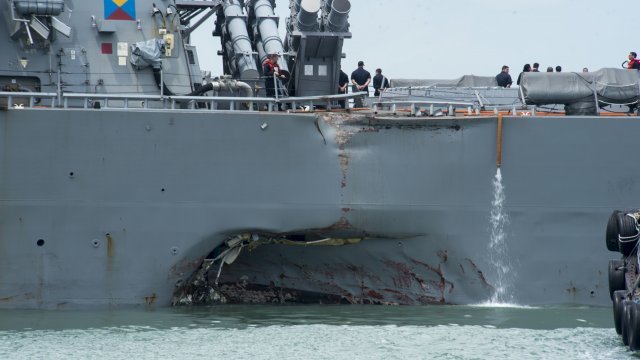 Ten U.S. Navy sailors are missing after a Navy guided-missile destroyer collided with a merchant ship east of Singapore.

The USS John S. McCain sailed toward port without assistance after the collision, but the Navy says it suffered "significant damage" to its hull.

That damage reportedly includes flooding in the ship's sleep and machinery compartments.

The McCain was on its way to a port visit in Singapore Monday morning local time when it collided with the 30,000-ton chemical and oil tanker flying a Liberian flag. 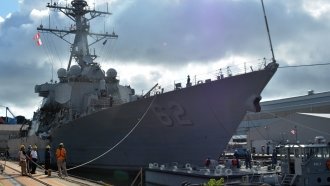 US Navy Announces Punishments For Crew On USS Fitzgerald

Search and rescue operations started immediately after the crash. As of Monday morning in the U.S., 10 sailors are missing. Another five sailors were injured in the collision.

The McCain collision comes after another Navy warship — the USS Fitzgerald — collided with a merchant vessel off the coast of Japan back in June. Seven sailors on board the Fitzgerald died.

The Navy says it will investigate this latest incident.

The McCain has a crew of 23 officers, 24 chief petty officers and 291 sailors.