Navy To Review Whether Edward Gallagher Should Be Removed From SEALs 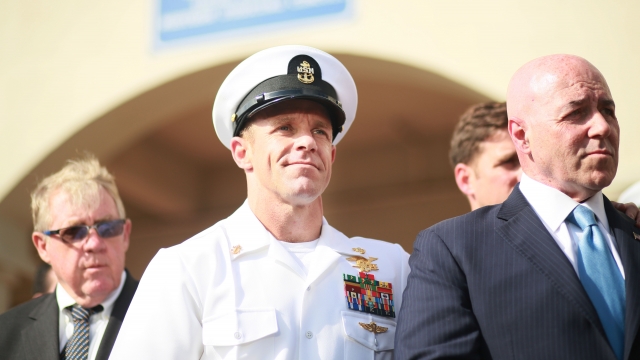 SMS
Navy To Review Whether Edward Gallagher Should Be Removed From SEALs
By Caitlin Baldwin
By Caitlin Baldwin
November 20, 2019
Navy officials are expected to order a formal review Wednesday. The sailor was found guilty of posing for pictures with an ISIS prisoner's dead body.
SHOW TRANSCRIPT

Navy SEAL Edward Gallagher could be expelled from the special operations force, just days after President Trump reversed his demotion in rank for posing for pictures with an ISIS prisoner's dead body.

Multiple outlets report Navy officials are working to take away Gallagher's Trident pin, a symbol of an official Navy SEAL.

Gallagher is expected to be formally notified of the move Wednesday. NBC reports a board will then make a recommendation on whether or not to remove Gallagher and three other SEALS from the force. It's important to note that being removed as a SEAL is not a demotion in rank.

The Navy's move to expel Gallagher from the SEAL corps is a rebuke of the president's decision to restore the sailor's rank of chief petty officer. President Trump ignored the Pentagon's recommendation to not interfere because it could undermine the integrity of the military's judicial process.

The three other men facing removal from the force are Gallagher's supervising officers who who testified at the trial where Gallagher was acquitted of war crimes and the murder of an ISIS prisoner.