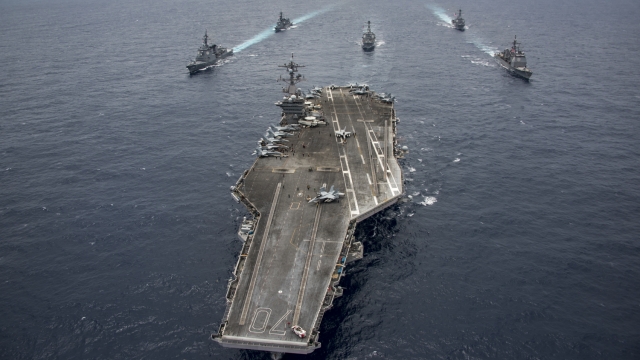 SMS
Navy To Introduce New Guidelines For Reporting UFO Sightings
By Alec Larson
By Alec Larson
April 25, 2019
​The Navy says this is in response to "a number of reports of unauthorized and/or unidentified aircraft ... in recent years."
SHOW TRANSCRIPT

The U.S. Navy is set to introduce new guidelines for military personnel on reporting sightings and encounters with "unidentified aircraft." It says it's "updating and formalizing the process" of collecting and analyzing the sightings.

The Navy said in a statement that the move is a response to "a number of reports of unauthorized and/or unidentified aircraft entering various military-controlled ranges and designated air space in recent years."

To be clear, the Navy's not saying extraterrestrial spacecraft are behind these experiences. But it does want to create a more orderly system to record and study the events.

There's been a growing interest in these sightings from Congress since 2017, when it was reported that the Pentagon had previously had an office focused on the study of unidentified aircraft. That research office, known as the Advanced Aerospace Threat Identification Program, closed in 2012.

The Navy told Politico that it had received "requests for information from Congressional members and staff" and has provided them with a series of briefings from naval intelligence officials.