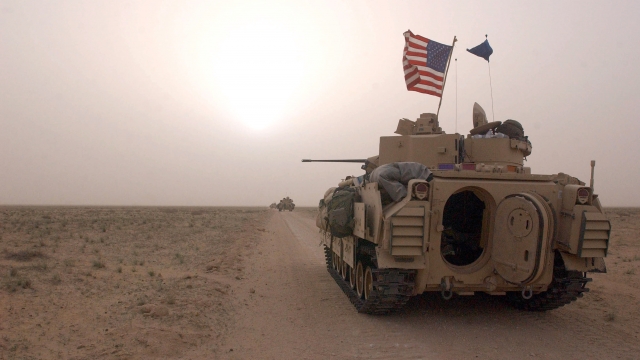 A Navy SEAL charged with murder of a wounded 15-year-old ISIS fighter and shooting at Iraqi civilians will move to "less restrictive confinement" soon, according to a tweet from President Trump.

Edward Gallagher, a 19-year Navy veteran, was arrested and charged last fall for war crimes while he was deployed in Iraq in 2017. The charges include murder, drug use and possession, obstructing justice, and aggravated assault.

One of the main accusations is that Gallagher stabbed a wounded prisoner of war to death, then posed for pictures with the body. Another is that he shot unarmed civilians with his sniper rifle and bragged about "racking up kills."

According to Gallagher's defense, he is being framed by SEALs who were unhappy with his leadership style.

Prosecutors reportedly have video evidence of the wounded teen and of Gallagher performing his re-enlistment ceremony over the man's dead body, as well as photos of Gallagher posing with the knife and the body.

He's currently awaiting his trial — which is set for May — at a Marine Corps brig in San Diego. A date for Gallagher's transfer has not been set yet, but his attorney hopes the President's support will speed up the process.

U.S. Rep. Ralph Norman has led the charge of politicians trying to move Gallagher, because he says it is "appropriate that [Gallagher] be treated as a decorated soldier who still has the presumption of innocence."