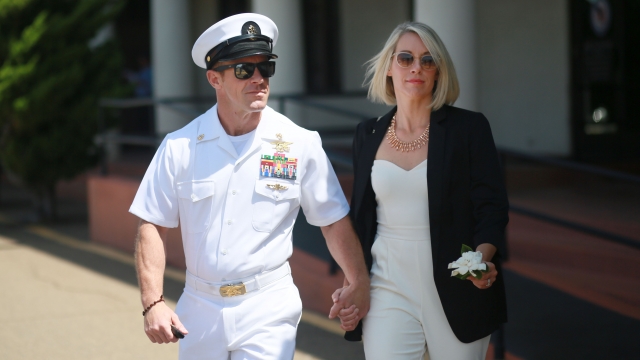 SMS
Navy SEAL Sentenced To Reduction In Rank For Taking Photo With Corpse
By Ahmed Jawadi
By Ahmed Jawadi
July 3, 2019
​A military court ​sentenced Edward Gallagher to a reduction in rank for posing with pictures of a dead teenage ISIS prisoner.
SHOW TRANSCRIPT

Navy SEAL officer Edward Gallagher has been sentenced to four months confinement as well as a demotion in rank for posing for pictures with the dead body of a teenage ISIS prisoner.

On Tuesday, a military court acquitted Gallagher on all but one of several war crimes charges, including for the fatal stabbing of a wounded teenage ISIS prisoner and shooting unarmed civilians from a sniper perch in 2017. The sole charge he was found guilty of stemmed from him posing for pictures with the prisoner's corpse.

Because Gallagher had already served more than four months while awaiting trial, he won't have to serve any additional time. He was also sentenced to four months' partial pay.

Members of Gallagher's own platoon turned him in last year. Gallagher's lawyers argued he was being framed by SEALs who were unhappy with his leadership style and wanted to take him down.

Last month, while the trial was ongoing, one of the SEAL's under Gallagher's deployment testified that he was actually the one who killed the prisoner and not Gallagher. The SEAL, who was granted immunity, said Gallagher had stabbed the prisoner. However, he said he suffocated the prisoner afterwards by closing an airway to a breathing tube to end his suffering.

In an interview on "Fox & Friends" Wednesday morning, Gallagher thanked President Donald Trump for helping him get moved to "less restrictive confinement" prior to his trial. Shortly afterwards, President Trump congratulated Gallagher, tweeting, "Glad I could help!"