Navy Recovers Remains Of All 10 Missing Sailors After McCain Collision 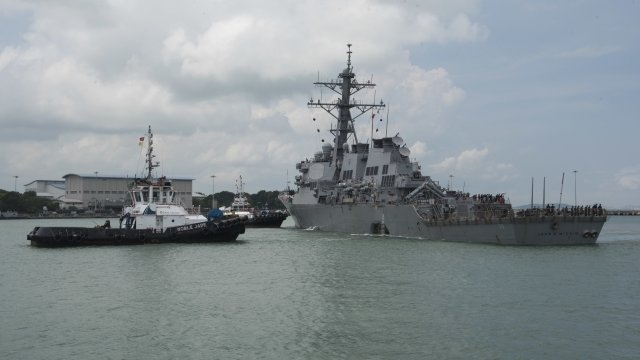 SMS
Navy Recovers Remains Of All 10 Missing Sailors After McCain Collision
By Katherine Biek
By Katherine Biek
August 28, 2017
Divers discovered the remains of all 10 sailors on board the USS John S. McCain, which crashed into an oil tanker Aug. 21.
SHOW TRANSCRIPT

The U.S. Navy has recovered the remains of all 10 sailors who were reported missing after the USS John S. McCain collision Aug. 21.

The remains of the other eight sailors were also found on board the McCain.

The New York Times reported the recovery mission took several days because the McCain was so badly damaged.

It collided with a 30,000-ton oil and chemical tanker east of Singapore. That crash tore a large hole in the McCain's hull.

The Navy removed Vice Adm. Joseph Aucoin as commander of the U.S. 7th Fleet as a result.

Based in Japan, that fleet is the Navy's largest forward-deployed naval force. Aucoin oversaw all four of the ships that have been involved in accidents in the Pacific this year.

Aside from the McCain collision, the USS Antietam ran aground in Japan; the USS Lake Champlain hit a fishing boat; and the USS Fitzgerald collided with a merchant vessel, resulting in the deaths of seven U.S. sailors.

The Navy says it's still investigating what caused the McCain incident.