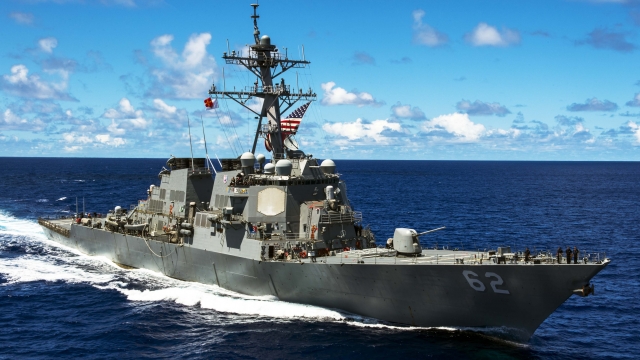 Seven sailors on board the USS Fitzgerald died after it crashed into a merchant ship off the coast of Japan in 2017.

The U.S. Navy says it's dropping criminal charges against two naval officers for their roles in the deadly USS Fitzgerald collision in June 2017.

Seven U.S. sailors on board the Fitzgerald died after it crashed into a merchant ship off the coast of Japan.

Officials later said that crash resulted from an accumulation of small errors by the crew, including a lack of communication and failure to follow nautical road rules.

The USS Fitzgerald's former commanding officer Cmdr. Bryce Benson and former crew member Lt. Natalie Combs were both charged with dereliction of duty and improper hazarding of a vehicle. Benson was also facing a charge of negligent homicide related to the collision, but the Navy dropped that charge in 2018.

The two were awaiting court-martial trials, but they will now instead receive letters of censure, according to the Navy.

It said in a statement: "This decision is in the best interest of the Navy, the families of the Fitzgerald Sailors, and the procedural rights of the accused officers. Both officers were previously dismissed from their jobs and received non-judicial punishment."

Besides Benson and Combs, the executive officer and senior non-commissioned officer of the USS Fitzgerald were also removed from their duties after the collision.